Recently, I stumbled upon this article, and it simultaneously irritated me and resonated with me at the same time. If you haven’t read it, it’s basically a rant about endurbros and people who shuttle trails and skid corners and partake in other heathen-ish mountain bike behavior. The conclusion: we, as mountain bikers, are failing to educate newer riders about trail etiquette and ya know, being decent human beings. Subtext: ENDURO IS RUINING EVERYTHING.

The reason that this article irritated me is that the tone is dripping with “back in my day we had to walk uphill both ways to school” (only the mountain bike version of this is “back in my day we had to pedal everywhere and going downhill wasn’t even fun because our seats were rammed up our butts and we were better for it”) and honestly this is never a terribly constructive argument. Things change. Mountain biking has changed a lot, mainly for the better. (HELLO, DROPPER POSTS). E-bikes are coming. Enduro is not going away. Sorry, but I’m not that sorry.

Yet, this article resonated with me because HE’S NOT EXACTLY WRONG NOW, IS HE? All you have to do is scroll down to the comment section to see people mouthing off about how “everyone rides for the flow of the descent” and therefore shouldn’t have to yield for climbing riders. Never mind that some of us (enduro racers included!!) occasionally like to try to clean techy climbs and don’t appreciate being run off the trail by entitled broskis (usually riding 6-inch Yetis on intermediate trails) while we’re at it. And all you have to do is go to an enduro race and listen to “that guy” (there is always that guy) moaning about a new piece of tape that didn’t exist in practice but was put up in the race precisely to prevent him from taking a “creative” line. Creative usually meaning NOT ON THE TRAIL AT ALL.

And oooooo-weeee the amount of complaining when an enduro stage involves more than 10 seconds of pedaling, or there isn’t an aid station at the top of every transition climb…Well, it’s not exactly impressive. If mountain biking’s older generations have gotten the idea that enduro racers are a bunch of delicate flowers who need to be shuttled for anything longer than a three minute climb and just want to “blow up turns ferda boiiiis” well, we can’t exactly blame them, can we? 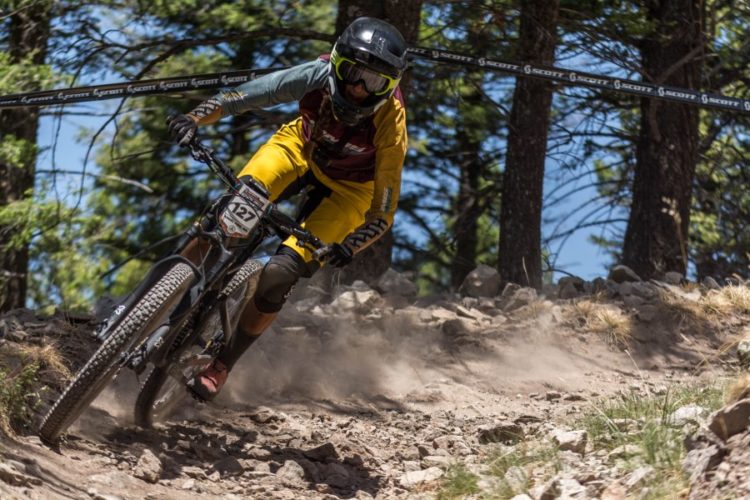 Here’s the thing — the rise in popularity of enduro racing and enduro style bikes has undoubtedly been a net positive. More trails, more people riding, more people with a vested interest in protecting mountain bike access. That doesn’t mean enduro doesn’t have its problems. (For what it’s worth, I think e-bikes will be a net positive for mountain biking as well. Which doesn’t mean there won’t be problems with e-bike use…But let’s save that discussion for another day.)

The major problem that I see is an incredible attitude of entitlement and “cooler than thou”ness among enduro racers and enduro style riders. Before the internet jumps down my throat, #notallenduroracers, obviously. But it is, I think, an attitude propagated by an industry that sells bikes using “bro-dom” as currency, and also by the type of content that many pro athletes use to promote themselves (myself undoubtedly included on occasion).

Here are a few examples:

We feel entitled to ride and race trails that are, by any reasonable definition, unsustainable, and we feel entitled to do so without giving adequate thanks to the people who built these trails and clean up after us.

We feel entitled to go mach forty down public access bi-directional trails because that’s what our bikes are capable of doing. And then we have the nerve of excusing it by saying trails should be directional (see comment section on the original post #facepalm).

We feel entitled to wreck corners just for the sake of a cool dust-plosion photo because Instagram, because #lightbro #dustbae

We feel entitled to shuttles during practice, even though this sometimes means hundreds of vehicles driving the same dirt roads, dusting other riders, and generally causing huge wad-ups for locals (I have seen this go down during EWS practice days and it’s not pretty).

We feel entitled to aid stations every 10 feet because somewhere along the line it became uncool to wear a pack or carry our own tools or generally just be on top of our own shit.

We feel entitled to be dismissive of other peoples’ skill sets (ahem, climbing or fitness in general) because we huck bigger jumps (or something?).

Obviously not everyone who rides a six inch bike is an endurbro who spends their weekends mowing down hikers and shotgunning beers at the trailhead. And there’s certainly more than a little entitlement to be found among people who think they deserve to have the trail all to themselves, in the name of silence and solace. But I’m an enduro racer, so this is my personal hill to die on, and I’m saying this — PEOPLE, WE CAN DO BETTER.

Let’s cut the bitching about course tape and just stay on the trail. You don’t need tape on both sides of the trail to figure out how to stay on it. Trust me, you really don’t.

As athletes, when photographers ask us to take questionable lines or explode corners, let’s question that. You can look cool and be on the trail at the same time — I promise you it’s possible.

Let’s make climbing cool again. We don’t all have to ride lightweight bikes and wear lycra (or fanny packs…), but let’s give credit where credit is due. Going uphill fast is badass.

Let’s be honest about the content we post on the internet — often I post POV from race runs which are on public trails that are temporarily closed for a race. It would in no way be responsible to ride at that speed if the trail were open to the public. Let’s start being up front about that.

Let’s knock it off with the cool kid posturing and be more supportive of beginners.

Let’s remember that we’re all mountain bikers and consequently, none of us are all that cool, anyway. So, be nice. Be friendly. Remember that other people exist and have a right to enjoy their time on the trail, too (whether they are going slower or faster than you).

And finally, because this is apparently somehow still a point of contention, let’s slow the f*ck down for oncoming riders/hikers/horses/whatever. This is safer, smarter and just plain nicer. And it’s not that hard to do.

Still have questions about trail etiquette? This is a good resource.

[Note: This is response to this piece in Adventure Journal by Mike Curiak. While I poke a bit of fun, at the end of the day I suspect Mike and I would agree on a lot and I’d be happy to meet him for a ride and a discussion — I’m sure he’d pedal my legs off.]

22 thoughts on “Does Enduro Have an Attitude Problem?”