This is Part III of a mini series about “learning to learn.” Check out the first two posts here and here if you haven’t already. 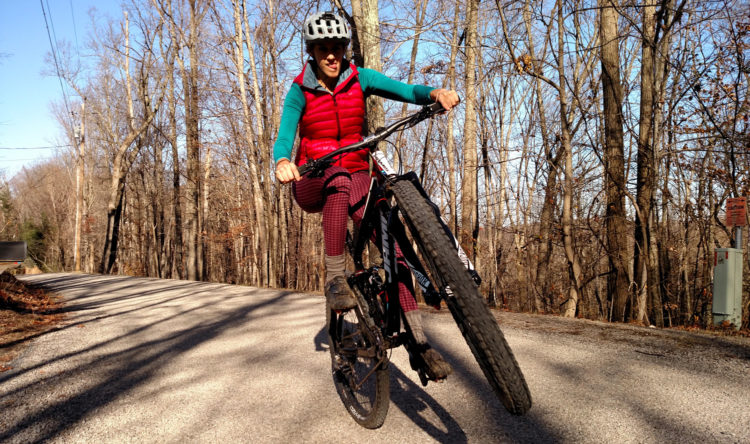 — Wheelies are fairly simple and easily defined. There is no right or wrong way to do a wheelie. Or rather, if you’re doing it the wrong way, your wheel will not stay off the ground for long and then you won’t be doing a wheelie anymore.

— It’s measurable. I’ve spent a lot of time this year working on my cornering, but while “get better at cornering” is very good goal to have, it’s a hard one to encapsulate in a blog post like this. For this post, I set a goal of being able to hold a wheelie for 20 feet. See, measurable! Literally.

–I was pretty bad at wheelies previously (spoiler alert: I am less bad at them now). To be honest, I’ve always considered that holding a wheelie for a long period of time was a useless, show-offy skill that I did not need to learn. Or rather, I told myself that since I couldn’t do it. I always assumed that I would be able to learn how to do it, if I put my mind to it, but I just had better things to do. So, ahem, it was finally time to put that logic to the test.

First off, I need to be honest — like all good blog post titles in the post-truth era, this title is a big fat lie. I’ve been able to get my front wheel up in a wheelie since I was 16, trying to learn to wheelie in the driveway and going backwards onto my ass every other time because no one told me you should keep a finger on the rear brake (PSA: YOU SHOULD KEEP A FINGER ON THE REAR BRAKE). So, really, what I learned through this project was not how to wheelie, but rather, how to hold a wheelie in a controlled fashion for a period of time longer than a millisecond (but that didn’t fit in the title). In some ways, these are two very different skills, and like I said in Part 1 of this little learning series — you have to start where you are. So if you don’t know how to get your front wheel up to the balance point, don’t set a goal of wheelie-ing for 20ft! ONE THING AT A TIME, PEOPLE.

Also, technically speaking, it was more than a week — but I do think it took me about seven solid practice sessions to achieve the goal of wheelie-ing for 20feet. We went to D.C. for a wedding in the middle of this, and there were some days of really heinous weather (not an excuse, but practicing wheelies when it’s 40degrees and raining is no fun at all). The point however still stands — you can learn to do something in a week! Whoo! 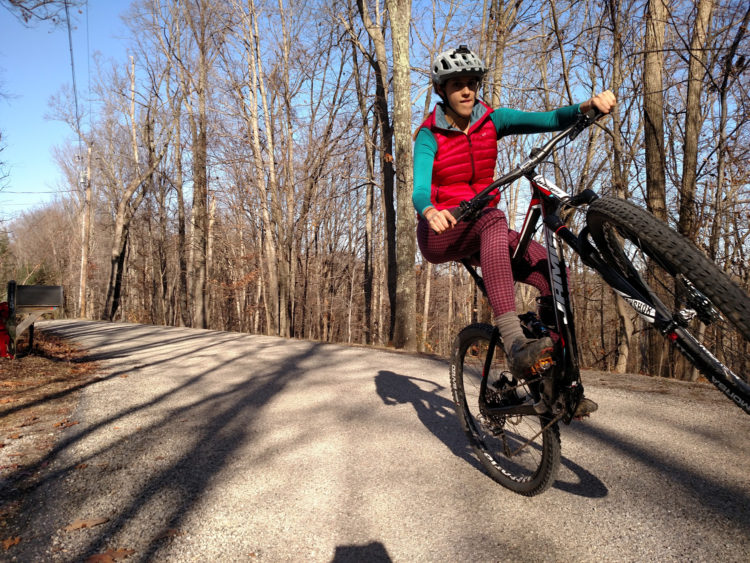 Here’s what I learned from this little experiment —

1. Keeping a finger on the rear brake is really important because it quite quickly eliminates all fear of going over backwards. As I’ve said before on this blog (and as Lee reiterated in Part 2 of this series), it’s hard to learn things when you’re scared of them.

2. My learning process is almost exactly as I described in Part 1. A few days of excitement as I start to progress, some frustration and annoyance as I hit a plateau and keep running into the same problems over and over again, and then boom, a moment of realization. And then the cycle starts all over again. It’s irritating to go through this over and over again, but at least I know what’s going on so I can push through it and continue to learn.

3. I am consistently amazed by how much progress I can make in a short time by doing something every day (or nearly everyday). I know I harp on this, but I can’t be the only one who has a tendency to give up on themselves WAY too early. A little bit of consistent effort can yield incredible results.

4. That said, a day off can work wonders too. Realizing when you’re too tired (or hangry or grumpy) to be practicing is almost as important as practicing. The goal of learning to learn is creating positive mental pathways — not negative associations.

5. 20 feet is not very long. It sounded longer in my head, but unfortunately wheelie-ing for 20 feet doesn’t even look impressive in a video, which, let’s be real, is the whole point of learning to wheelie. But that’s the good thing about setting achievable goals — you achieve them. And now that I managed to wheelie for 20 feet, I can congratulate myself for doing so, and set some loftier wheelie goals. I’ll be documenting them on #wheeliewednesday on Instagram so make sure you’re following me there!

Here’s a video documenting my progress — (I recently resurrected my youtube account and am thinking about maybe making the occasional poorly edited video. If you want to follow me there too, you could be my second ever subscriber! I have one other video and it is four years old and there are penguins in it so you should definitely check it out).

And since it’s that time of year — I want to challenge all of you to spend the first week of 2017 practicing something new. It doesn’t have to be bike related, but you do have to make an effort to practice it every day. Tag me on FB or instagram and let me know how it goes.

11 thoughts on “I learned how to wheelie in a week”