That has been my mantra for the past few days…

We all have different coping mechanisms when faced with injuries or a bad race or basically life not working out perfectly. Some people get angry. Some get mean. Others get depressed. Still others stick their heads in the sand and pretend it isn’t happening. No wait, those are ostriches.

Guys, I’m an ostrich. When things go to shit, I bury my head six inches deep and keep up a resounding chorus of LA LA LA LA LA CAN’T HEAR YOU LA LA LA to keep the demons at bay. And then, when I finally get over myself and decide to face up to things — retroactively, of course — I write a dramatic blog post. (Do ostriches blog?)

It’s not the worst of coping mechanisms, but it’s still pretty bad. And this strategy has already failed me a few times with my current struggle — my knee. I know, I know. You’re really tired of hearing about my left knee. Believe me, I am also tired of hearing/thinking/talking/writing about my damn left knee. 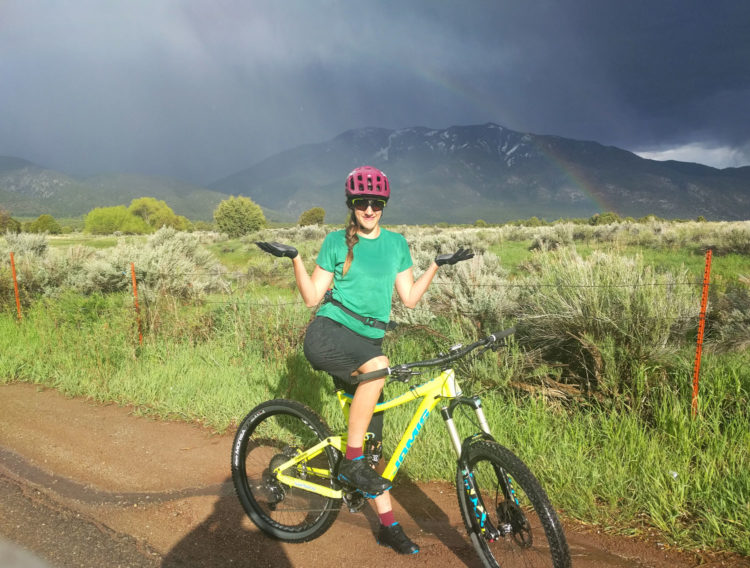 This is a metaphorical photo from last year, because rainbow.

Let me tell you a little story about last winter. I was in Scotland, having basically the best time ever. I was training a lot. Going to the gym. Writing regularly. Being really diligent with just about everything in my life. And then I blew up my knee with some dastardly combination of front squats and steep Scottish fire road climbs. It was not terribly surprising, nor was it the end of the world, although it rather felt like it at the time. But here’s the worst of it — I shut down. Completely. For like three weeks.

I was really upset, sure, and in a fair bit of pain (serious tendinitis is really underrated — I would rather break bones) but that’s no excuse. I just stopped doing EVERYTHING because it was too emotionally painful to think about my goals. I felt like I was going backwards and that my life was over and blah blah blah, so I spent my days reading novels and turning my brain completely off. I stopped communicating with my coach. I stopped writing on this blog. I buried my head in the proverbial sand, which in this case looked a lot more like $40 worth of mystery novels on Kindle.

I realized recently, now that I’m dealing with my knee again, that I have no records of that time. I have a vague idea of how long it took for the acute inflammation to die down, but I don’t really know for sure, because I didn’t deem that as important information to record. But damn, it would be really helpful to know right about now.

I have come a long way since last February. The 2016-17 off-season was a difficult one for me in a lot of ways, and most of my issues originated between my ears. I’m in a better place now, and I no longer see my knee pain as a harbinger of doom. While I’m fairly frustrated on a short-term level (as it’s ruining some fun plans for this week, for example), I’m not having an existential crisis, so that’s a step in the right direction. And, as I mentioned in my last post, I’ve gotten better at acknowledging when a flare is coming on and taking steps to mitigate it — so I’m cautiously optimistic that I won’t be sidelined for quite as long this time.

But, despite all that, I’m still really struggling to pay attention, to not check out. There is still a part of me that feels like if I ignore the problem that it will go away. And then there’s the fatalistic part of me that feels like acknowledging the extent to which my knee is bothering me — recording pain levels in my training journal, emailing my poor physical therapist for like the 40th time this week — is giving it too much power. I know that’s a little ridiculous, but there it is.

Here’s the problem — as athletes (and as human beings), we do ourselves a disservice when we check out the moment things aren’t going our way. I’ve been guilty of this many, many times and the irony is that that checked-outed-ness (#sorrynotsorry) usually ends up making me more unhappy than whatever the bad situation was in the first place. Because there is really nothing I hate worse than that feeling of not progressing, not growing, not caring.

Not caring is a coping mechanism — a shield for when caring is painful — but ultimately it ends up being a double whammy of negativity because, for better or for worse, I do care, and no amount of pretending otherwise will change that.

Recently, when I’ve been frustrated or sad or angry about my knee, I’ve been forcing myself to acknowledge those emotions instead of blocking out everything, and to get to the root of WHY I am feeling that way, and how I can use that as fuel, instead of an excuse to give up. In truth, there are plenty of things I can do right now that don’t involve riding but that will still contribute to making me a better athlete — and a big one is to try to use this time to figure out as much as I can about what’s going on with my injury, as frustrating and discouraging as that process is. Reminding myself that this time is not wasted, but rather, a necessary, if inconvenient, part of my growth as an athlete, has helped immensely.

So, the next time you’re struggling with an injury, try reminding yourself to pay attention. Take notes on how you’re feeling, both mentally and physically. It will help you put things into perspective — and be a helpful resource for the next time you find yourself in a similar situation. Then you’ll be able to tell yourself “hey, I always get massively grumpy on the third day of sitting around resting and doing nothing, this too shall pass.” I promise you, just knowing that will help.