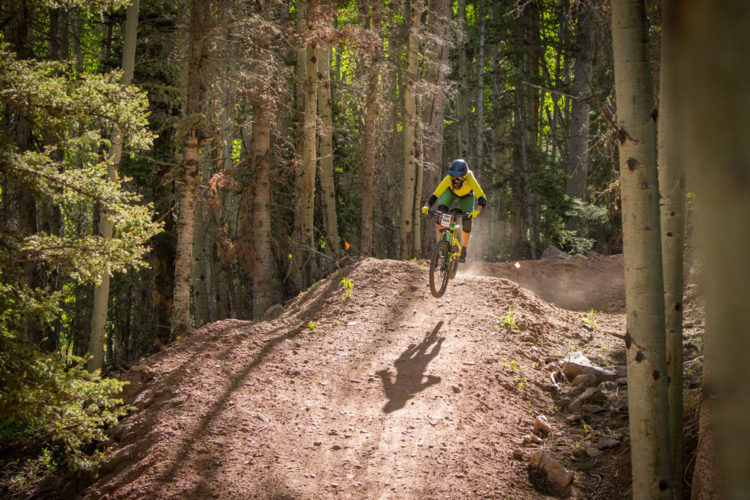 Mountain biking is a frustrating sport, especially as a beginner. I know because I’ve been there. This sport is just plain hard — that’s the reality. But the truth is that we often make it even harder than it is, simply thanks to the things we let out of our mouths. We beat ourselves up over small failures, we focus on negative (read: scary) outcomes, and we put ourselves down to others. Sometimes we don’t even realize we’re doing it.

We all know that negative self talk is bad, but how many of us are actually successful at stopping it? I know I often succumb to being my own worst critic, and just telling myself to “stop it” and “be positive” is rarely very helpful. Ultimately, wrestling with your mind is just not very productive — but there are some things you can do to set yourself up for success BEFORE you get bummed out. And they’re pretty damn simple. Often, even when it seems impossible to control the thoughts running through your brain, you CAN control what comes out of your mouth, and that’s a good start.

Here are three things you’re probably saying that are hindering your MTB game. And what you should be saying instead.

1. What you say: “I don’t want to hit that rock,” “I just need to make sure I don’t put my front wheel in that hole,” “I have to avoid that slippery root.”

I am super guilty of this one. When a section challenges me, I will stop and analyze all the possible ways to go wrong and then set out to avoid those. Often this works fine, but in general, it’s a bad strategy. Why? Because the more brain power and energy you spend thinking about everything that could go wrong, the more you’re pulling yourself in that direction. Our thoughts influence outcomes. While it can be very hard to prevent yourself from noticing potential scary outcomes, you CAN control what you say out loud to your riding buddies. Steer the conversation away from worst case scenarios and towards what you want to happen. Talk about the line you plan to take. Talk about what you will do to execute that line (preloading, manual-ing, leaning into the corner, etc.). Stop talking about what you want to avoid. This will help you stop THINKING about what you want to avoid, which in turn will help you visualize and then execute the section successfully.

2. What you say: “wow that was terrible cornering,” “that jump was really sketchy, I almost crashed.”

This one is pretty self explanatory, yet it’s insidiously difficult to avoid. Ironically, the more motivated you are to improve, the worse these kind of comments get. I’m constantly analyzing my riding, which in general has led to some huge improvements, but can often feel like a relentless, merry-go-around of “not being as good as I think I should be.” And there’s really no point in hyper-analyzing a bad move or near crash (unless you ACTUALLY don’t know what went wrong, but realistically, you probably know exactly what the problem was). Instead focus your energy on doing the little things — looking ahead, body position, etc. — that usually result in good cornering and safe jumps. Stop worrying about that last jump, or that last corner, and move on. This isn’t to say you should move on to bigger jumps or sketchier features — if you get feedback that you’re not doing things entirely right, yes, you should listen to that, and maybe back it down a notch. But you don’t need to give a sermon about how bad it was to your buddies.

Your goals should inspire you, not give you anxiety. Voicing negative goals like “not crashing” or “not being last” just leaves you focusing on negative outcomes, instead of positive ones. And focusing on negative outcomes makes them more likely to happen. You may still be worried about being last or crashing, but expressing this in a different way (less focused on what you DON’T want to happen and more focused on what you DO want to happen — riding smoothly, having fun, doing your best) is the first step in letting go of these fears.

what you should say instead: “Thanks for waiting for me.”

I wrote a blog post about this last year, and it’s the most popular one on this blog. I think it’s because these subtle linguistic changes really do make a difference — and noticing how big a difference simply saying thank you instead of sorry can be, made me realize how many other ways changing what comes out of our mouth can change our experience on the bike (and in life in general). When you apologize for being slow, you’re just affirming a negative (being slow), not to mention making everyone feel awkward. By changing that apology to a genuine expression of gratitude, you change the dynamic of the ride.