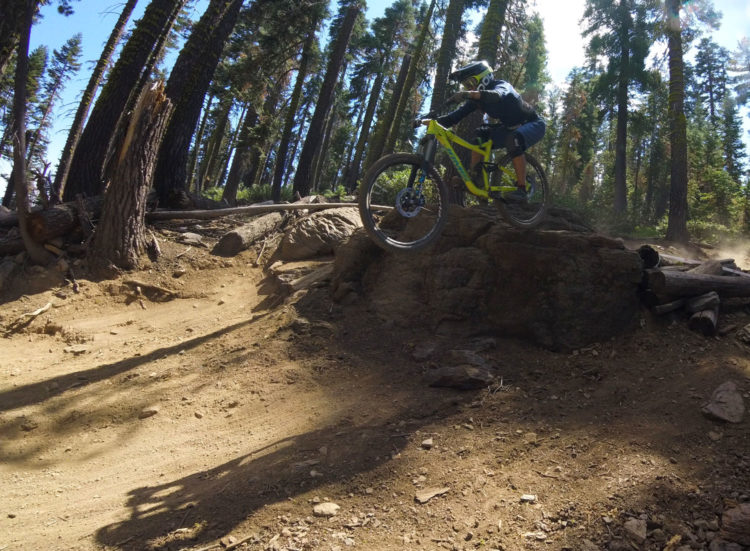 Third weekend of August, 2016 — I go flying over the bars into a creek during the second stage of the Big Mountain Enduro Steamboat. My arm swells up to twice it’s normal size, which prevents me from finishing the race.

Third weekend of August, 2017 – I go flying over the bars into the bushes during the first stage of the Big Mountain Enduro Crested Butte. I break my helmet, my shifter and pedal, all of which conspire to prevent me from finishing the race.

The parallels here are troubling. Same weekend, same race series, same stupid mistake (more or less), and same frustrating outcome. All a year apart. It’s really easy to think “oh hey, look how far I HAVEN’T come.” The truth, however, is the above is only half the story. So here’s the rest:

After my crash in Steamboat, I fell apart. I cried for houuuuurs. I fell into a serious funk — to be fair, it wasn’t entirely about that crash. 2016 had been a really brutal season, and that was the final of a series of three fairly high consequence wrecks and, basically, it was the one that broke my confidence like a dry twig. I only raced twice after that crash, and at both races, I was, quite frankly, pitiful. I skirted everything remotely technical. I was terrified of everything and it showed, with some of my worst results of the year. Technically my season ended in late September, but really it was over the third week of August.

Back to the present. After crashing in Crested Butte, I freaked out for about 20 minutes, which was approximately the time required to confirm that I still had all my teeth and that none of my bones were broken. Then I started looking for a ride back to town. I went back to the van and made myself a cup of coffee. I stretched. I got my bike sorted out. The next day I went for a spin to stretch out my tortuously tight neck and back. And the following weekend in California, I hit some of the gnarliest lines and drops I’ve committed to all year, and had one of my cleanest races of the year. It wasn’t my fastest, but it was still pretty good.

Cheaper than therapy*, more effective than ibuprofin . . . *Price of bike, replacement parts and ER visits not included in this calculation.

Winston Churchill said “never waste a good crisis” and the same is true for a good failure. Failure can break you. I know this from experience. But it can also be a catalyst, an opportunity, and as such, a secret weapon. So what’s the difference between a failure that breaks you, and one that builds you? Where is the line? And how do you make sure you don’t waste your failures?

My view on failure has changed a lot over the past year. While I have always accepted failure as “part of the process” and “a stepping stone towards success,” I don’t think I fully grasped how that worked. Failure doesn’t just breed success on its own — the act of failing does not make you more likely to succeed, simply for having survived the failure. It’s not a box you check on the “to do before I succeed” list. In fact, if anything, it’s been my experience that one failure can sometimes beget more failures, especially when you get into an “I suck” or “everything is terrible” mindset. Bad things come in threes, right?

So how do you cultivate a headspace where you’re able to take a good (or bad?) failure, and turn it into an opportunity? In other words, how do you keep trying after shit goes pear-shaped? I’ve been thinking about this a lot lately, and here are my thoughts:

1. Keep your goals in mind, and consider whether your reaction is helping or hindering your reaching them. Neither of the crashes I talked about earlier really needed to affect my long term goals — I didn’t break my arm in Steamboat, I didn’t sustain any serious injuries in Crested Butte. However, because I reacted so badly to the crash in Steamboat, it ended up affecting some of my goals, like my goal to finish the season strong, and my goal to improve my overall in the Scott Enduro Cup. It’s tempting to be self destructive after a big crash or a bad race, and it’s a pattern I really have to fight to not fall into. I lose my appetite because I’m so bummed out. I forget to hydrate. I don’t stretch because “what does it matter anyway.” But the truth, of course, is that it isall that matters. Even if my injuries had been more serious, more moping hardly would have helped — I would have been better served by eating, drinking and getting the appropriate medical attention as soon as possible. The thing about reactions is that they are reactive, which is to say, they can’t change anything that has already happened, so the only useful reaction is the one that moves you forward.

2. Put your failure in perspective. Pretend what happened to you happened to someone else and then treat yourself accordingly. Frankly, enduro can be a pretty brutal sport and I think I have watched nearly all of my friends and fellow racers fail to finish (or start) a race due to a crash. Do I judge them for it? Nope. So why hold myself to different standards?

3. Learn something. But only helpful somethings. “Learn from failure” is probably the most touted self-help advice on the planet, but it needs a caveat. Learning from failure is only productive when what you are learning is actually an honest-to-god fact, and not a pseudo-fact narrative provided by your inner self-destructive gremlins.

Here are a few things I “learned” from my crash in Steamboat:

Here are a few things I could have “learned” in Crested Butte, but chose not to:

Going fast is scary. (Sorta true, not helpful)
I’m bad at going fast. (Not true)
I should never pedal in race runs lest I smash said pedal into the ground. (Obviously not true)
I shouldn’t race the third week of August (Debatably true, definitely not helpful)

Instead, I learned the following:

Probably not a good idea to switch a shock two days before a race without paying careful attention to getting the sag set at the same level, because even a few millimeters can change your awareness of where your pedals are (True, actionable, helpful)

I can crash at 25 miles per hour and roll out fine. (True, positive reinforcement for my stretching routine)

I made the right decision by pulling out of the race (True, positive reinforcement for not being a dummy)

Tuesday's got nothing on this

My crash is Steamboat was, in many ways, a wasted failure. I did learn a few helpful things, like when to say “enough is enough” and pull out of a race, and also that the sky doesn’t fall down when you DNF, but mainly I learned a lot of untrue, negative things that took awhile to unlearn. I beat myself up for something that was, when you get right down to it, a pretty ordinary mountain biking mistake. I hit the wrong rock and went OTB — that hardly makes me special. But I lost sleep over it, and sabotaged the rest of my season by not taking care of myself, and permitting my confidence to slide to all-time lows.

The intervening year has not been the easiest, but somewhere along the line I’ve gotten better at failing, and that’s a pretty damn good thing.

2 thoughts on “Stop Wasting Your Failures”