When I was 18, I finished high school and moved to Spain to work on a farm. It was sort of an unusual path – especially in rural Ohio. But I wanted to do it, so I saved up to pay for a plane ticket, and found a farm that would cover my room and board for three months, in exchange of eight hours days of farm labor.

It was a big transition for me and IT WAS HARD. Spain lived up to my expectations — I ended up on this very picturesque farm in the Northern province of Asturias, in a tiny (like, three house) little village with characters like Juan Jose, who had no teeth but assured me I could come sleep on his couch whenever I wanted, no questions asked. I was working for a wonderful couple, who were really true pioneers — they had built this little farm up from scratch, basically from the ruins of an old, abandoned village. And to top it all off, my bedroom for the first three weeks was a tiny shack that shared a wall with the sheep shed. It was pretty much everything I could have dreamed up in my bedroom in Ohio. 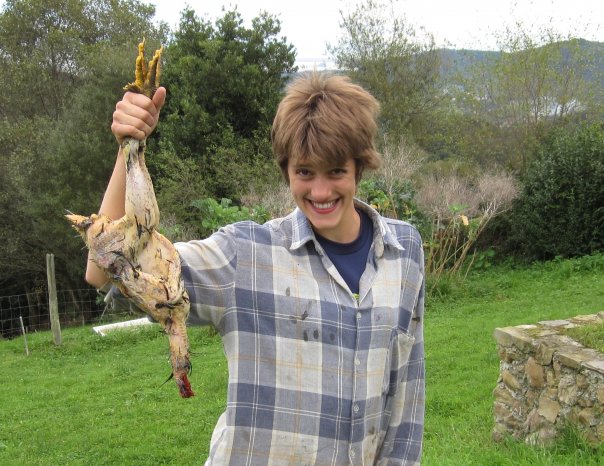 With a chicken I helped butcher, circa November 2009. Also, does this hair-do need to make a comeback? Comment below…

But there was one part of the equation that didn’t live up to expectations. And that was me. I wanted to be this adventurous traveler, and I thought by flying to the other side of the world that I would BECOME THAT but instead I was still a teenager. And I was scared. And lonely. I missed my boyfriend, the one I had broken up with to be this adventurous traveler. I missed my friends. I was homesick, and on top of all that I was feeling guilty, because I was supposed to be having this adventure of a lifetime, but instead I was lying awake in my sheep shed at 2am crying my face off because I didn’t feel brave. I was stressed out and anxious and unhappy and I KNEW that if I were truly that independent, adventurous person that I wanted to be, I wouldn’t be feeling that way.

I spent most of my time in Spain with Pepe, who was my boss on the farm. He was in his fifties, and probably the most Spanish Spanish person alive. We spent hours working in the fields together, and he liked to quiz me about American politics or the meaning of life to help the time go by. “Why do you Americans have so many guns?” “How do you feel about communism?” “That boyfriend of yours, would you marry him?” and, one day, “what kind of person do you want to be?”

“I want to be independent,” I said. And I still remember how he looked at me after I said that, although I don’t remember exactly what he said, I think an accurate summary would be “joder you’re here, aren’t you? How much more independent do you want to be?” 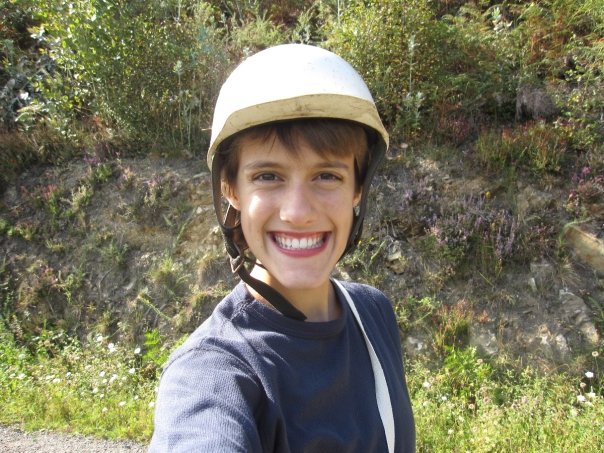 Riding my bike into town with the only head protection available, circa September 2009

It was a fair point, I conceded. Most of my peers were in college in Ohio, but I had flown across the world to a foreign country where I had then gotten on a train and two different buses to go the middle of nowhere, where I had been picked up by a complete stranger I had met on the internet. Now I was living in their sheep shack and breaking pasture eight hours a day. Most of my high school friends had iPhones but I had a long distance phone card and a borrowed flip phone, and if I stood on the roof of my shack and pointed it in the right direction, I might be able to phone home. If I borrowed the ancient too-small mountain bike that had been sitting in the barn for several decades and rode the 12 kilometers into the coastal town of Santa Lucia, I could order a cafe con leche in the local bar and maybe interact with someone my own age, assuming of course, that I could get over the language barrier and the fact that talking to strangers at 11am in a bar is weird, no matter where you are.

I could see why Pepe would think I was independent, but it was only because he couldn’t see inside my head.

Nearly a decade after this grand adventure, I can finally see what an unusual (and yes, independent!) 18-year-old I actually was. At the time, however, all I knew was that I was scared. And because I was scared, somehow, it didn’t count.

This pattern has followed me into bike racing. I want to be a badass mountain biker and I set benchmarks accordingly. “If I hit this drop, I will be that person.” “If I ride this trail, I will be that person.” And on and on and on. Then I achieve those benchmarks, but I still don’t feel “badass” because I was scared, or it didn’t look good in the photo, or “other people are doing way more incredible things.” I’ve realized that I’m searching after an emotion and not really an achievement at all. I want to do badass things while feeling like a badass. The irony is that when I do accomplish that — when I do something “badass” and it feels easy, it no longer feels very badass and the cycle begins again. I’ve felt like an imposter since I started racing pro, but the reality is that for four years I’ve shown up to pro enduro races, raced and even occasionally stood on the podium. Am I not a pro racer because I still don’t feel like one? I am finally at a point in my life where I’m willing to say – screw that shit. 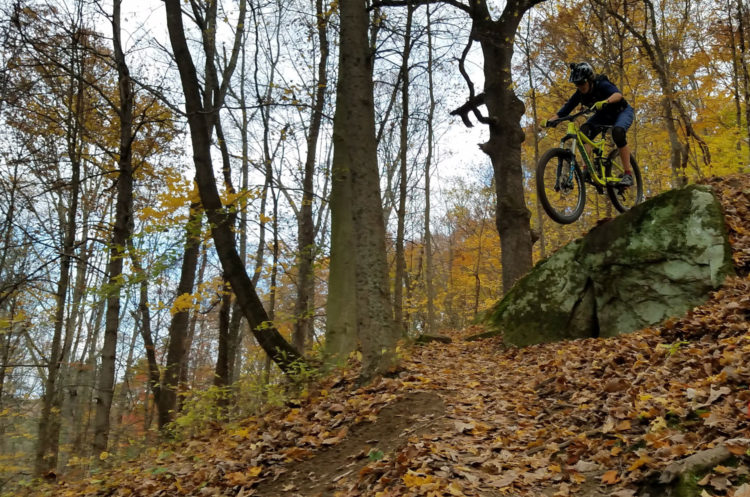 Am I cool yet? What is it actually going to take?

If you want to be bike racer, all you have to do is show up and race. You don’t have to win. And you certainly don’t have to feel like a bike racer. We say “fake it ’til you make” and that’s cool and all. That’s been my strategy all along and it’s worked out okay for me. But there’s a flaw. Sometimes you get so good at faking it that you don’t realize that you crossed some invisible line and you’re no longer faking and maybe you never really were. At some point, faking it IS making it. If all your actions and achievements show that you’re an incredibly independent teenager, than you freaking are. If all your actions and achievements show that you are a professional bike racer, than you freaking are. There is no higher bar of entry, because no one else can see inside your head and you can’t see inside theirs. You don’t have to feel a certain way. You just have to do the things. And at the end of the day, if you are doing badass things, you are a badass, regardless of whether you feel like one or not. And at the end of the day, that has to be enough.