I have a knack for getting myself into rides and adventures that are over my skill level. I’m not sure why, but I think it’s a combination of hubris and FOMO. This tendency has been both a blessing and a curse. On the blessing side of things, I’ve found myself to be far more capable than previously imagined, I’ve raced (and gotten my ass kicked) in beautiful places all over the world, and I’ve developed a bit of an immunity to abject failure and being last in a ride or a race. Because when you’re really in that far over your head, survival itself is a victory.

And the curse? Well, when you’re constantly pushing yourself and putting yourself into situations where everyone is more skilled than you, it’s easy to lose perspective on your own abilities. This can lead to burn out and just general discouragement, something I’ve had to learn the hard way.

This year, I’ve been a lot more careful with the types of rides and endeavors I get myself into. Part of me hates this, because my favorite kind of rides are the ones you aren’t sure you can finish — you know, those rides that takes seven hours and you finish in the dark covered in blood, sweat and tears. (See: The Most Fun You Will Ever Have). I would have loved to jump into the first two Enduro World Series races, as I have for the past three years, and I would have loved getting an absolute pummeling in the Chilean dust and Colombian mud. However, last year I had to face the fact that those kinds of races and rides might not be what my body and mind need, and that starting my year with two utterly overwhelming races was a big contributor to my early season burnout in both 2016 and 2017. This year (with a few notable exceptions, ahem *Downieville*), I will be racing races that I am actually adequately prepared for. I know, I know, boooooooooring.

However, it seems that I just can’t resist the allure of putting myself in impossible situations. Since I’ll be doing it less on the bike this year, moto rides have (apparently) become my outlet for the outrageous. Take, for example, this past weekend’s moto group ride. It was my first real group ride on a moto and I’m not going to lie, I was a little nervous. Okay fine — I was really nervous. I’ve never gotten nervous for mountain bike group rides, which is, I suppose, something I’ve taken for granted. I’ve gone on “casual” rides with top EWS pros, but I guess I always knew that even if I was being dropped I could handle myself well enough on a bike to not be a huge burden on a the group. Not so on a moto…

That’s the thing about riding motos that makes them so incredibly intimidating to me. On a bike, when you’re in over your head, you just say “f*ck it I’m walking” and then you shoulder your bike and get yourself where you need to go. On a moto when you’re in over your head you’re stuck wrestling a cantankerous, 250lb mass of steel and pure, unadulterated (and if you’re me, uncontrollable) acceleration over technical terrain. This lack of a bail-out makes riding motos with others extra daunting, because in addition to possibly slowing down the group, you may end up needing their assistance to get from point A to point B.

Which was exactly what happened. 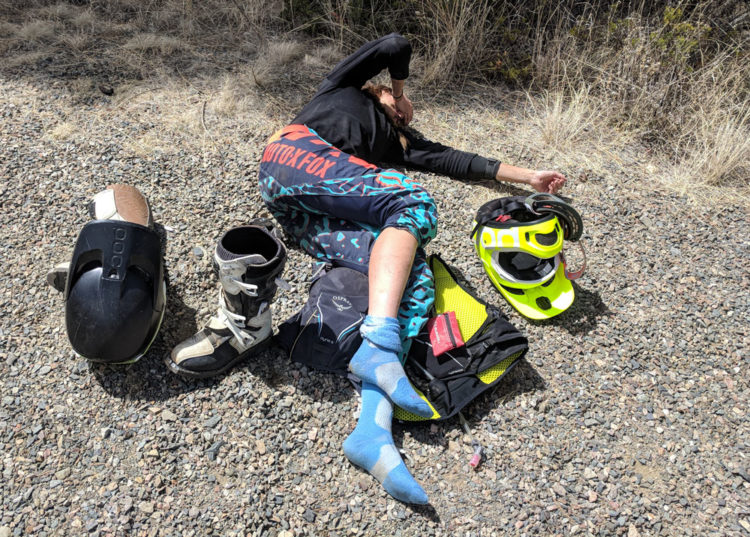 I was right to be nervous because as it turned out I had no business being on this ride. The trails were way beyond anything I had attempted on a moto before — we “rode” (for me it was more a straddle and paddle situation) some of the techiest, loosest, tightest shit I have ever attempted, I dropped my bike about 1000 times, I flailed around so much on the descent that I ended up sustaining some solid 2nd degree burns from my moto’s exhaust pipe, and I was 100% “that person.” You know the person everyone is stopping and waiting on for AGES, the person who needs to have their bike pushed up the hills and dragged out of ditches, the person who is just an all-round motorized shit show.

Should I have gone on this ride? In hindsight, no, probably not, but I’m glad I did (I’m also glad I bailed after 15 miles and let the group finish out the 60 [60!!!] mile loop without me). I learned a TON, got a healthy dose of perspective and by the end I was even using my rear brake without looking down at my foot. And today I have that wonderful, jelly-leg, “I really overdid it yesterday” feeling that is my absolute favorite.

This ride really made me realize how much value there is in putting yourself into situations that are over your head skill-wise, provided of course, that you do so sparingly. Four years ago I probably would have been in tears after the first technical trail, sure that I was humiliating myself, that everyone thought I was the worst rider they had ever seen and that they hated me for ruining their ride. I would have cried and pouted and apologized and put myself down over and over again. I would probably STILL be bummed out about it three days later.

But now, when I’m in these kinds of situations, my mental perspective is so, so, so different. This weekend I thought to myself “wow, Syd, this was a terrible idea, but you’re here now, so you have to deal with it.”

I tried to convince the ride organizer that he didn’t have to follow me and keep helping me pick up my moto, but when he refused for the third time, I stopped protesting. I remembered all the times I have ridden behind and helped out slower riders on a mountain bike and how annoying it is when they keep telling you to go ahead (like WTF am I supposed to do, leave you out here for the buzzards?). I reminded myself that my karma is solid on this and it was ridiculous to act like I didn’t need help. So I just thanked him profusely, and I thanked everyone for waiting for me, and I [tried to] keep a smile on my face. And doing this was hard. I’m not going to lie. I wanted to breakdown and scream and feel bad about how shitty I am at riding dirtbikes. But I now know that that doesn’t work.

Telling yourself you’re terrible and don’t belong on a ride (or in a race or whatever) doesn’t grow you an entirely new skill set. It doesn’t do anything at all, other than waste time that you could be using to get yourself out of the situation with whatever skill set you do have available to you. On this ride, I took the first bail-out I could, but first I had to make it through 6-8 miles of the nastiest moto singletrack I had ever ever attempted. There was literally no other option but to keep going. So I accepted help, I picked up my bike when I dropped it, I took breaks when I needed to so I wouldn’t severely injure myself (which, by the way, is the only way to REALLY ruin a group ride), and I made it. I was slow, I was pitiful, I was a mess. But the only crying I did was out of pure exhaustion and not self-loathing. Honestly, that’s a victory that’s been four years in the making.

2 thoughts on “The Value of Putting Yourself in Impossible Situations”