See this post about the time my knee blew up in Scotland in 2017. Or this one about the time it blew up in Ohio in November last year. The most frustrating thing about my knee issues over the past few years has been the fact that I am able to recognize the patterns, yet am helpless to change them. 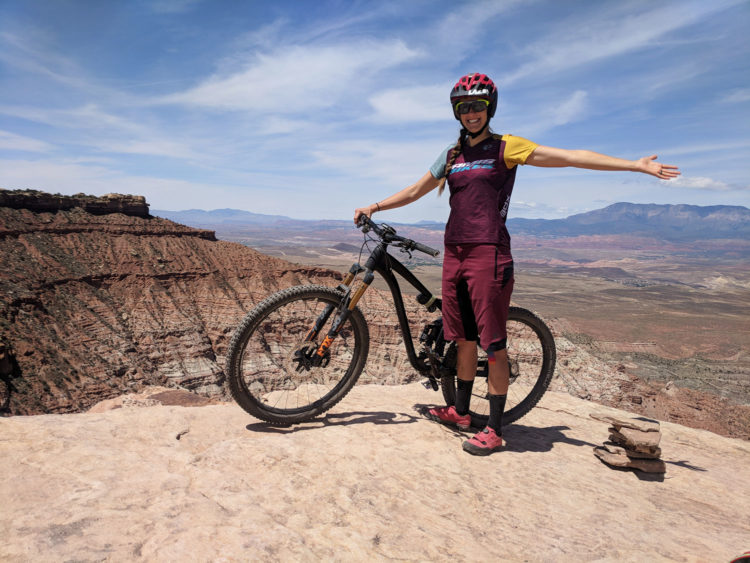 Views in St. George were alright

Over the past year, I have tried very, very hard to find an “explanation” for my knee issues. I got an MRI (I’m “fine”), I did blood tests (I’m vitamin D deficient, like everyone else!) and I even did an elimination diet that required going an entire two months without cheese (unlike everyone else, I don’t appear to be gluten intolerant).

I am finally starting to accept that there may be no explanation. I might just be a perfectly healthy adult with diva knees. The only explanation, such that it is, might lie in the pattern above. I don’t listen to my pain.

And this year, I finally started to change that. Instead of riding in St. George, I went to the gym and did the hardest core workout I have ever done in my life. My abs were sore for days. When we were in Moab the next week and my knee still wasn’t 100%, I bought a $14 pair of goggles (do not recommend) and started working out in the pool. Instead of racing that weekend, I did another core workout outside the van. Obviously, none of this was as fun as racing or riding in Moab or St. George, but it was oddly satisfying. I knew I was doing everything I could. Was it everything I wanted to be able to do? Nope. But it was my best effort given the situation.

That has been my philosophy this year — do what I can. Sometimes this means that I take the workouts that Dane gives me and scale them down so much they are barely recognizable. Heavy squats turn into body weight squats turn into no squats at all and push-ups instead. But the point is that, even when I was having knee issues, I was still getting some benefit. I was still getting fitter. And I wasn’t as tempted to immediately jump back onto the bike since I still felt like I was accomplishing something.

Oh, and I actually have a pretty strong core, now, for the first time in my life.

If this strategy sounds obvious to you, let me tell you — it’s not as easy as it sounds, especially when the line between what you “can” do and what you “really shouldn’t be doing but theoretically can survive” is difficult to distinguish. In the past, this strategy may not have worked for me as well because if I even entered a gym when my knee was hurting I would overdo it. I simply did not understand the extent to which I needed to scale down. Or I was uncomfortable doing so because frankly going into a gym to do 10 body weight squats and a core workout makes a person feel a little, um, I don’t know, lame? self-conscious? guilty about not following the training plan to the letter?

Sometimes all you can do is sit in the creek.

Getting to this point was more than just acknowledging injury and my pain. I had to find my starting point (like I talked about in my last post), and most crucially, I had to get over being ashamed of where that starting point was. I had to stop caring what other people thought of me (why aren’t you riding? why are you doing this, that or the other?), and I had to take care of myself. It was a long process, but it worked.

6 thoughts on “This year, I changed the way I deal with injury”