It certainly isn’t that easy, but — I’ve realized recently — it really might be that simple.

This is the blog post that I wish someone had written for 2014 Syd. That year, my first year racing pro, I spent something like 75% of my energy feeling bad about myself for not being fast enough, and the remaining 25% actually trying to get faster. It was a pretty rough year. I didn’t have much fun. I did a lot of crashing and a lot of getting last place in pro races. And every time I crashed or got DFL, I took it as another opportunity to remind myself that I was shit. If I weren’t shit, I would have gotten so much better by now. If I weren’t completely and totally untalented and uncoordinated, I would be as fast as the women I was competing against. Surely, something was wrong with me. Surely, no one else had ever sucked so thoroughly at something they cared about. Surely, I was special, both in the depths of my suckiness and the height of my (unrealistic) expectations.

Spoiler alert: I wasn’t special. I sucked an ordinary amount for someone just starting to race pro. I wasn’t spectacularly untalented (nor was I spectacularly talented). I was just just inexperienced. I was a very ordinary human trying to live up to extraordinary expectations. 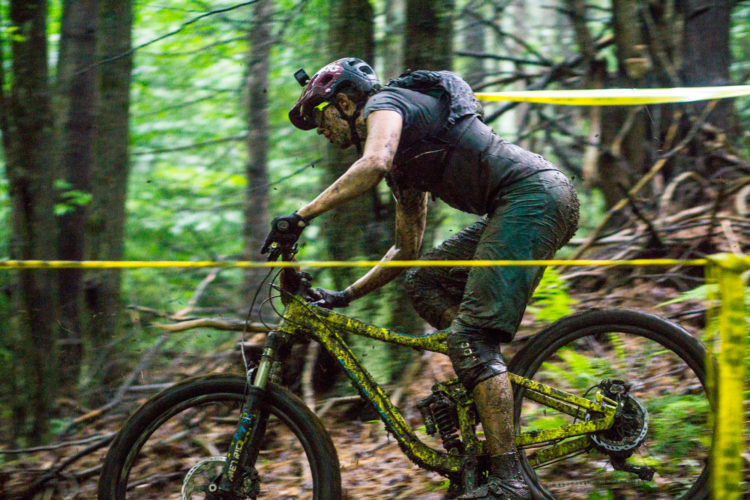 Not special, but definitely muddy, and getting faster.

The one thing that has never made anyone faster on a bike is thinking that you should be faster, constantly telling yourself you’re terrible, and generally just anguishing over your past performances. All that crap accomplishes nothing.

I used to think that it did. I used to think I could will myself to be faster. I used to think that if I was kind to myself, or accepting of my current level, that I would effectively be “letting myself off the hook.” I was afraid I would get complacent. I was afraid being nice to myself would make me arrogant. I thought I needed to keep reminding myself that I was terrible — like, hey, don’t get cocky, you still suck, there’s work to do — or I would suddenly become “okay with never being good at anything.” This mindset meant I couldn’t take a compliment, so if Macky told me I was riding well, I would interrogate him to bits and explain why he was wrong. If other people told me I was riding well, I would just laugh or roll my eyes or make hilarious jokes like “you must have mixed me up with someone else, haha.”

Friends, if this sounds familiar to you, here is a quick memo: THIS KIND OF CRAP IS NOT FUN FOR ANYONE. IT’S NOT FUN FOR THE PEOPLE YOU’RE TALKING TO AND IT’S CERTAINLY NOT FUN FOR YOU. CUT. IT. OUT.

Over the past few weeks, I have spent some time with a few people who talk to themselves (or about themselves) like this, and I had a realization. The realization wasn’t that this kind of behavior makes you miserable to be around (although it does), or that these people are incredibly wrong about themselves (I had that realization years ago). No, this week’s realization was more along the lines of WOW OHMYGOD THIS IS A GIGANTIC WASTE OF ALL OF OUR TIME.

And energy. And life force. And everyyyyyything.

Like, we’re out here riding our bikes, and learning, and having fun, and then you have this one person who is spending half their energy criticizing themselves, and throwing compliments back in people’s faces and just generally being miserable. It sucks the energy out of a group, and it’s also very difficult to watch. Especially for me, because I get it. I’ve been there. I have been that person, and I know that that kind of attitude did nothing to make me faster, and everything to hold me back. I know now that if I had put in the work, and enjoyed the process, and been kind to myself, I would have ended up in the same place, only without all the misery along the way.

So here’s my plea to you — if you want to get faster, just do the things that will make you faster and skip all the mental anguish along the way. Ride your bike. Have fun. Do work. Cut yourself a break when you don’t get the things the first time, or even the first 100 times. Cut yourself 1000 breaks if you need to, just keep moving forward. Be nice. Accept where you are. Accept who you are. If you want to get faster, just get faster.

3 thoughts on “If You Want to Get Faster, Get Faster”