Since my last update, I worked up to running for a full minute and a half, a couple times in a row. Run a bit, walk three minutes, etc. Not exciting, but progress none-the-less. And then, shit happened again. The race season began with Sea Otter, shortly followed by full knee meltdown (only the other knee this time — my body likes to keep me on my toes!). And, well, running got put on the back burner. But — if we’re keeping with the kitchen cliche — it is still ON THE GODDAMN STOVE. Which is just my way of saying that I’m stubborn and while this is obviously going to be harder than I thought, I’m not going to slink off and give up on it.

When I initially set a goal of running for three miles without knee pain, I was feeling pretty good. So yeah, maybe there was a little hubris involved, but setting a goal of running for any less than three miles starts to sound really pathetic, and a 5k was always my best distance as a runner, so I just went with it without giving too much thought to feasibility. In reality, this goal is proving to be very ambitious, and I’m only just starting to realize how much so. I’ve been putting all of my energy into getting healthy and being able to run again (which, by the way, turns out to involve very little running), and yet, it is now May and my longest run so far has been just over a minute. The math here does not exactly work out to me being able to run three miles by December. 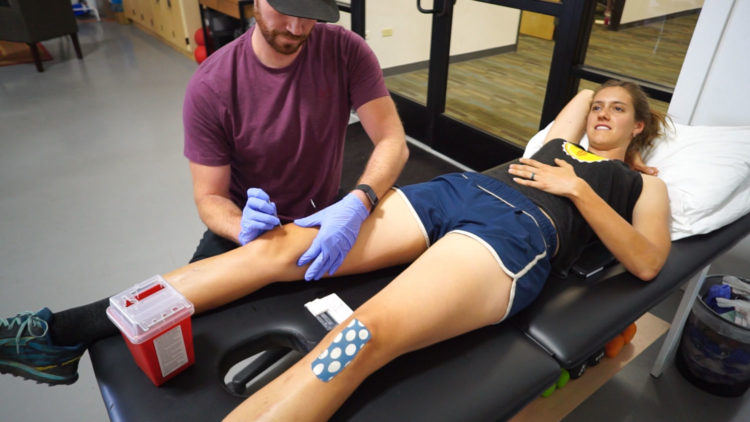 Back in PT letting Dane stick needles in my leg

That said, I have made progress in a lot of ways, and I constantly remind myself that the only way to lose this game is to give up. I made up the game, and those are the rules. As long as I’m making progress, it doesn’t matter if the timeline isn’t what I had hoped. You can set goals, but after a certain point, you really can’t FORCE things to happen the way you want them to. And there HAS been progress… I have tackled some issues that last-year-me would have swept under the carpet just so that I could race the next weekend. Having a non-bike race goal has forced me to be much kinder to my body than in past years, and much smarter. Part of this evolution is the fact that I am just COMPLETELY AND TOTALLY FED UP WITH BEING INJURED and the other part is definitely having a goal that prioritizes my overall health. Also, as I’ve been reminded a few times recently, being a professional athlete doesn’t mean you’re healthy — quite often it’s the contrary.

Nutrition — I’ve been working closely with a nutritionist to try to figure out if I have any food intolerances or allergies that might contribute to any of these tendon issues. This is new for me as I’ve always just eaten whatever I wanted (luckily I like vegetables so it wasn’t terrible). I followed an elimination diet for four weeks, which was a pretty brutal experiment. No gluten, dairy, eggs, corn, soy, peanuts, etc., etc. I felt pretty good on this elimination protocol for awhile, but some knee problems started to creep back in towards the end, which led me to think that while eating a highly anti-inflammatory diet is probably not a bad treatment plan, any one food group is unlikely to be a causal factor. At this point I’ve added most major food groups back in, which definitely makes life easier. While this experiment didn’t provide any clear answers, it was certainly helpful, and I’m relieved to now be fairly confident that, despite what the internet seems to think, gluten is not causing all my problems.

Also on the nutrition front, I recently took the logical next step to get some blood work done to check for any serious vitamin or mineral deficiencies. At this point it seems like the best bet is to get as healthy as possible and hope that *something* helps my knees. The blood work provided some interesting information, although nothing too damning (which, I guess, is a good thing). Apparently my Vitamin D and B12 levels were on the low end of normal. Which is to say, probably way too low for a high level athlete or, you know, anyone who likes to routinely run themselves into the ground (hands in the air if this is you).

Physical therapy — I recently got to spend a week in Boulder working with Revo PT a little more consistently. We tried some dry needling, some dry needling plus e-stim (needles in your leg, electrical current being run the needles, CRAZY STUFF) and some blood flow restriction training. The latter involves strapping a blood pressure cuff around your leg, cutting off 80% of the blood flow to your leg and then doing some body squats. The benefit is that it makes body weight squats feel like you have 400lbs on your back, so you get the training benefit of a difficult strength workout without loading your joints. At least that’s the theory, and I have some seriously sore quads to back that up. 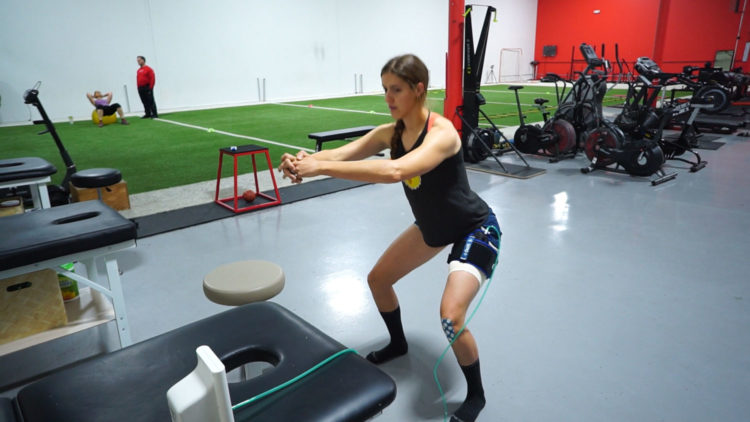 Overall, I’m at a point where I’ve accepted that, at least until I can figure out the source of these problems, my training is going to be interrupted and that getting back to running is (and never was) going to be straightforward. Accepting this is progress in and of itself because it allows me to embrace incremental gains, and to just keep plugging away with what I can do. It might not be everything I want to do, but as long as I’m doing something to move forward, I can keep my mental headspace in the positive. In other words, it’s okay take a few steps back to go forward. The key is to not let it turn into a backslide.

4 thoughts on “Running Update #3: This Might Be Harder Than I Thought”