First of all, sorry for being so unforgivably trendy.

I mean, really, social media detoxes are all the rage on social media right now and they are unbearably, awfully twee. And, as far as I can tell, pretty ineffective, unless of course, you’re the person cashing in on the phenomena.

Like this — Look, you can pay these assholes thousands of dollars to take away your phone for three days, and also, presumably, teach you how to make flower crowns and appreciate what their website completely un-ironically terms “analog art.” But don’t worry, the price tag includes “juicing and superfood smoothies” and “clarity, vision and enhanced creativity.”

I’m not saying that spending time without your phone won’t result in enhanced creativity — it probably will. I’m just saying that you should never pay someone thousands of dollars for something you can simply achieve by powering off your feckin phone and having your s/o hide it in your least favorite pair of socks. I also find it a little ironic that one of the trendiest things to do on social media right now is to RAGE ABOUT HOW SOCIAL MEDIA IS KILLING US ALL. (The second trendiest thing being raging about Instagram’s algorithm changes on Instagram, of course.)

I’m not immune to this trend, or to the so-called dark-side of social media. Here is a post I wrote for Carmichael Training systems about how social media might be ruining your bike ride. To paraphrase, IT’S KILLING US ALL. But, on another level, I truly love social media. It has given me an excellent platform to share my story. I’ve met new people with similar interests. I’ve made friends, I’ve kept up with old friends I most certainly would have lost touch with otherwise. I follow a lot of cute dogs, like this corgi who looks damn fine in goggles. And yeah, I’ve basically made a living off of it. So I have no intention of giving up social media, especially for a weekend of legos and laughter yoga.

I think my biggest problem with the concept of a “digital detox retreat” is that it’s just that, a retreat. It’s not real life. I spend enough time off the grid camping in a van to know that’s it’s not that hard to ignore your phone when you have no service, and when the alternative to scrolling mindlessly thought Twitter is sitting by the campfire enjoying a beer and then going to bed at 8pm. That is the life, no doubts about it.

But it’s not very sustainable — and my real life and my job require me to use the internet and social media, and I’m going to have to learn how to deal with that, preferably in a way that doesn’t require constant detoxing.

And for the most part, I’ve done that. I’ve developed a lot of coping mechanisms — I’ve turned off push notifications from Instgram, I deleted the facebook app from my phone, I had Macky install a variety of facebook blocking programs on my computer (once I figure out how to easily disable them, he has to find another). I unfollowed anyone who posts right-wing conspiracy theories or uses the term “fake news” unironically and also all the people who can’t distinguish between your/you’re and angle/angel or otherwise do things that irritate me in a wildly-out-of-proportion-with-the-offense kind of way. And, at long last, I’ve finally started to let go of the THIS PHOTO DIDN’T GET 500 LIKES panic and just post whatever the hell I want (within reason, of course). And while I occasionally experience a little FOMO or anxiety about what other people are doing, that has lessened significantly over the past few years, as I’ve gained more confidence in myself as a person and an athlete. That particular problem wasn’t Instagram — it was me.

No, currently, my main problem with social media is just that it’s a mindless time suck. I fill up my empty moments by scrolling through instagram. I procrastinate by finding random pseudo-intellectual articles on Facebook. I suddenly find myself reading the worst of the worst of clickbait articles — you know the ones that require you to click through 10,000 pages before you find out what happened and then inevitably the website freezes and you never find out whether or not the conjoined twins share a brain or what the iguana did that was so amazing and suddenly you break out of your trance and go WHAT AM I DOING WITH MY LIFE.

So, the problem isn’t negative emotions or thoughts, but rather lack of thoughts and emotions altogether. It’s the “micro-boredom” that Brendan Leonard from Semi-Rad talks about in this post. The more you use your phone to fill up those little moments of boredom, the more you get bored. It’s a vicious cycle, and I don’t even realize I’m doing it. My lack of intentionality, especially with the Instagram app on my phone, is pretty alarming. Sometimes I don’t even realize I picked up my phone. I stare at the same photos over and over again (since those are the only ones the new Instagram algorithm delivers to me #RAGE) without even really realizing I’ve seen them before. My brain is empty, absorbing nothing, and certainly not a poster-child for “clarity, vision and enhanced creativity.”

I don’t want to stop using social media. I just want to stop letting it seep in and fill up all those blank spaces with vapid nothing-ness.

I want to use it with purpose and intention and mindfulness. I want to be able to make decisions like “today I’m not going to look at my phone, because I want to focus on the here and now” without it being a big thing. I want to be able to step away from social media, without someone having to hide my phone in a stinky pair of socks.

The first step to doing that is to TAKE A BIG STEP BACK, because oh brother, we are in deep. Now seems like a good time to do that because A) it’s the holidays and nobody cares what random mountain bike athletes are doing at this time of year and B) I’m going to Thailand for Christmas without my bike and the hustle of trying to find daily content was going to be a pain in the ass anyway and C) I want to focus on experiencing Thailand WITHOUT my phone/work being a constant distraction and D) I’d like to go into the New Year with a healthier relationship with social media and my role as an influencer/athlete. 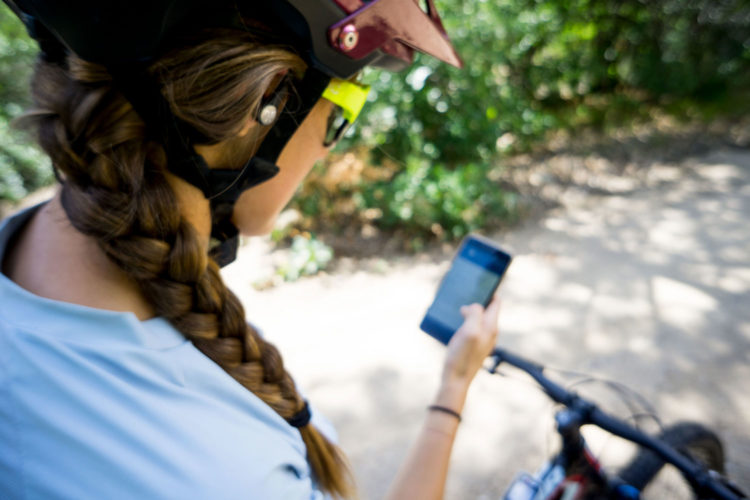 So I’m going dark. For at least a week. Possibly longer if I want to. This is my game, so my rules.

Of course, because I can’t leave well enough alone, I’ve scheduled a bunch of posts on my Facebook page, as well as a few blog posts. This is the first time I’ve attempted to put my blog on “autopilot” so hopefully it works out and Mailchimp doesn’t run amok with my subscriber list. Since there’s no decent way to schedule on Instagram, I’ll be de-activating the app on my phone and staying A-WAY. I’ll still be checking my email and Whats-App, just to make sure the sky isn’t falling, but other than that, NO SOCIAL MEDIA FOR ME.

Am I a little nervous that a week of no posts will tank my Instagram engagement levels to prehistoric lows? Yeah, sure, but I’m hoping this worry will evaporate when I’m sitting on a beach sipping coconut water out of an ACTUAL COCONUT. These are the things we miss out on when we’re slaves to an algorithm, people.

Have you ever tried a social media detox? Would you? Do you need it? How have you created a healthy relationship with social media?

2 thoughts on “Why I’m Trying a Social Media Detox”