I was pretty nervous going into last weekend’s Downieville Classic, and in the days before I struggled to pin down exactly why I was so plagued by nerves. After all it’s not like I haven’t raced Downieville before. If I could survive this race with the fitness I had in 2014, surely I could do so again. And I’m not really afraid of suffering in a bike race. In fact, I rather looked forward to that part. So why was I so damn anxious?

Eventually I hit upon the reason — I was so nervous because I literally had NO IDEA what to expect.

I hadn’t done a cross-country MTB race since Downieville in 2014, and even before that, my XC racing “career” was pretty sporadic. While I did do a handful of endurance races and collegiate XC races over the years, I never exactly trained for them (unless you count, like, the four interval workouts Macky prescribed for me between the years of 2011 and 2013). I just rode my bike a lot, and then went out and rode my bike in a race, and usually it worked out okay, even that one time when I was living in Argentina and went out and raced a 60 mile “rally cross country” race (i.e. gravel racing before gravel bikes were a thing) when I had barely ridden my bike in three months. Finishing races (even really effing long ones) has never really been an issue for me, I guess because I’m stubborn and maybe I just have some pretty solid endurance reserves to draw on even when I have done literally nothing to earn them. 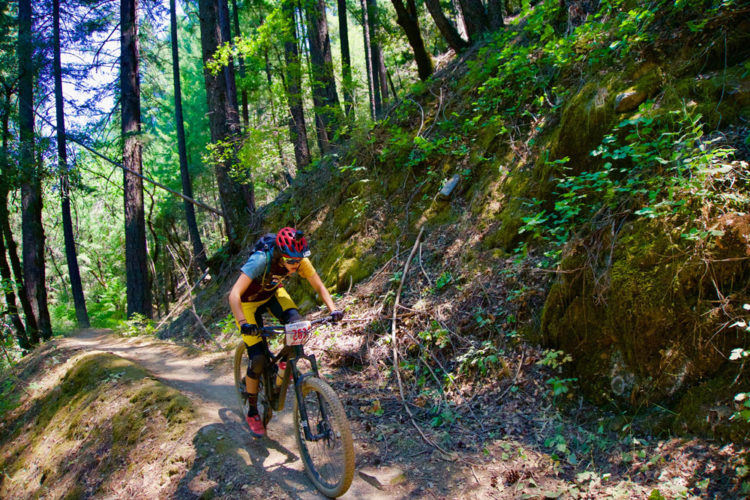 But this year, I had a slightly different perspective. I didn’t want to just finish Downieville. I wanted to race it. And unlike my previous endurance racing experience, I was racing in the pro category now, which is obviously a completely a different ballgame. And unlike the enduro races I’ve been doing for the past few years, I had almost no idea how I would stack up against the other women. Enduro races have become discouragingly pre-determined for me in the past few years. While I try to fight this instinct, it’s hard not to look at the start list and formulate a pretty accurate prediction of where I’m going to end up. I rarely (okay, basically never) surprise myself.

The Downieville XC, however, was going to be a surprise one way or another, because frankly I just haven’t done nearly enough racing like this to have any idea how it was going to go. And that element of surprise? Knowing I had the potential to surprise myself? Well, it scared the shit out of me.

Once I realized why I was so nervous I was able to come to grips with it, and get ready to race. I reminded myself that whatever happened, it was just information, and jotted down the following in my journal:

“Whatever happens tomorrow, your only goal is to RACE. No beating yourself up for falling short of your expectations — remember: you don’t even know what your expectations are, so how can you possibly fall short?”

On race day, I surprised myself in a variety of ways.

I actually managed to {sort of} pace myself for the first climb, as opposed to going out too hard and exploding spectacularly, which was certainly a concern. I held my previous best 20 minute power for SIXTY MINUTES (I have yet to hear from my coach as to whether this is a good thing or evidence of prior sand-bagging). I got hit by epic double leg cramps in almost exactly the same spot where I cramped up in 2014, which was only a surprise because I was somehow naive enough to think that this year’s training would mean no more cramps. And, somehow, I finished the race under the three hour pro cut-off in 2:58, a goal that I hadn’t even made because I thought it was completely impossible with the new (and slower) course.*

I released myself from expectations for this weekend, essentially because I had to. I had nothing on which to base my expectations, so I just let it go, which made this race an interesting experiment. And yes, I did better than I expected. Did I wildly outperform the amount of training that I put in? No, not hardly — that’s not how the world works. But at the same time, I do think I raced to my potential with what I have right now — something that has been difficult for me to achieve with enduro racing, possibly because those prior expectations are so deeply ingrained. I finished this race completely wrecked (arguably a little too wrecked, judging by how I felt in the DH the next day, but that’s a story for another day), and feeling pretty satisfied with my performance. I stayed positive, I didn’t get discouraged even when I was starting to cramp, and I definitely raced all the way to the finish. And honestly I had a lot of fun.

Here’s the deal with expectations – whether we meet them, exceed them, or fall short, they are always imagined limits. They are always predictions. They are always future-thinking, not present-living. So, maybe we’re better off without that shit. Afterall, if we don’t know what to expect, how can we possibly fall short?

*[To clarify, I finished the 2014 Downieville XC in 2:57, but the addition of the new singletrack at the top this year slowed most people’s times by 15-25 minutes, so I’m considering my time this year a ~15min improvement. For some reason the cut-off was still left at 3 hours which obviously made it significantly more difficult to achieve. I had completely put the cut-off out of my mind, because I didn’t think there was anything I could do about it, but somehow I still made it.]

2 thoughts on “Here’s the Deal with Expectations”