I’m going to be honest. I don’t follow many other pro athletes on social media. At the risk of sounding a bit judgmental, I find many athletes’ Instagram accounts to be repetitive, inauthentic and well…boring. But then there’s Katrin Davidsdottir.

Katrin is a professional crossfitter, which is apparently a thing. I really don’t care about Crossfit. I barely even know what it is, and I’m certainly not interested in doing it. But I am very interested in Katrin. And not just because she is the badass viking goddess I hope to grow up to be (tough luck, I know), but because her mental game, and the way she talks about the mental aspect of sport, is unlike any other athlete I’ve followed.

One of the first posts I saw from her was this one, in which she talks about how she and her coach high five every time they identify a weakness, because it means they’ve found room for improvement.

Weaknesses are just really good opportunities to get BETTER 💥💥💥 – My coach, @benbergeron, is coming to Europe this November to spread all his wisdom 🔥💪🏼 CHECK LINK IN MY BIO FOR MORE INFO! // Milan, Amsterdam, London!

My first reaction to this was, holy shit, who thinks like that, is this chick for real?

My second thought was, holy shit, why don’t we all think like that, that is BRILLIANT.

It’s so absurdly obvious, when you think about it. If we identify a weakness, we have a found a path to improvement. If I’m at this level now, and I suck at hitting drops, then logically the only thing I should be thinking about when I think about drops is “damn, how good am I going to be when I’ve mastered this.”

Except, of course, “logically” has nothing to do with it.

Generally, when I encounter a new weakness (say, all the punchy, rock step-ups I didn’t make it up in Sedona last weekend), high fives are the last thing on my mind. Instead my monkey brain is going “wow you really suck at this, how are you a professional mountain biker and you can’t get up this rock, you’re a fraud, everyone is laughing at you, I saw a video of so-and-so doing this and you’re supposed to be way better than her, wow you really are terrible at this I guess you just suck at everything in general.”

I’m going to hazard a guess that most of your internal narratives sound a lot more like that and a lot like less like Katrin’s. But just because I’m in good company (like, 90 percent of the non-viking population of the world), doesn’t mean that kind of self talk is productive.

As human beings we really just hate being called out on a weakness. It makes us feel exposed and vulnerable. Instead of looking at how we can improve, we automatically start looking for ways to disguise the weakness, to appear stronger and better than we really are.

Here’s an example. Say you don’t make it up that rock step-up. You have two options. You can:

A) push your bike up quickly and hurry to catch the group
or
B) walk back down and try it again.

One of these options makes you better, one of them makes you look better. 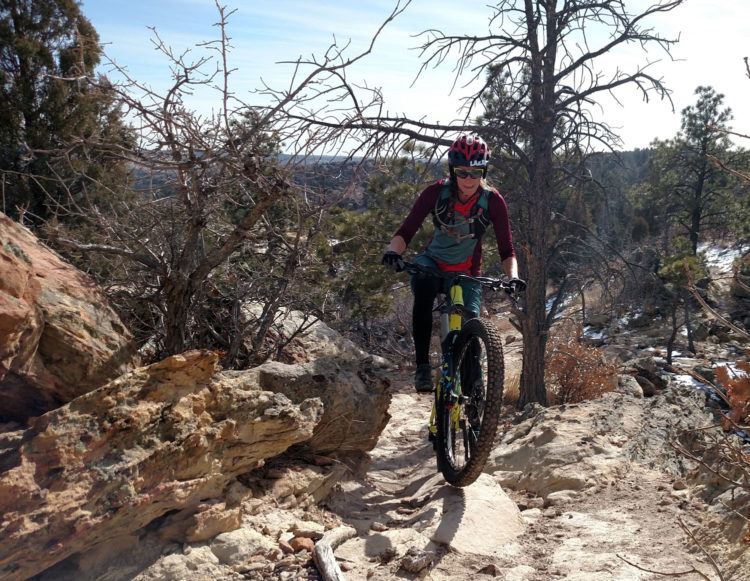 Sessioning a difficult climb in Colorado Springs earlier this year.

I’m not saying you need to be sessioning every little thing you screw up (sometimes it’s just not the time), but rather that we should all try to be aware of these instincts to sweep our weaknesses out of sight, especially when they override opportunities to actually work on those weaknesses.

I mean seriously, why not? What if instead of beating yourself up for being bad at something, you congratulated yourself on identifying what you need to work on? What if you thought: “This is awesome, just imagine how strong of a rider you will be when you learn how to climb techy stuff like this. Now you know what you need to focus on to get there.”

If you’re like me, this kind of re-framing is very difficult because a part of your brain will start screaming some unhelpful rendition of “you’re letting yourself off too easy! you’ll never get better with that attitude!”

But that’s just not true, and you know it. Objectively, neither celebrating a weakness nor freaking out over it will change the outcome. All that stuff is just what’s going on in your head. It’s just noise. The only thing that WILL change the outcome and make you better is working on that weakness. And, which attitude is more likely to encourage you to practice?

Yeah, that’s what I thought.

Of course, this sort of thinking doesn’t come naturally, probably not even to Katrin Davidsdottir. You have to practice it, and sometimes you will have to make a conscious effort to pretend that you are excited about discovering a weakness. I’ve been trying this out recently and a part of me haaaates it. It feels hokey and forced and just kind of ridiculous. But you know what? It also works.

6 thoughts on “Next Time You Fail, Give Out Some High-Fives”