Here’s something I’ve realized over the past year: culturally, we have a really WONK definition of “determination.” This is something I’ve been thinking about a lot recently, especially with regards to skills progression. 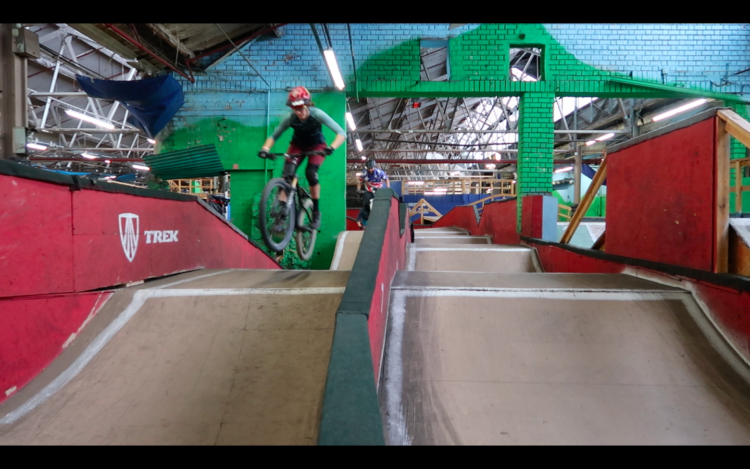 A few weeks ago we headed up to Cleveland for a day at Ray’s Indoor Bike Park. Ray’s is a huge ware house full of jumps, skinnies, a pump track and tons of other fun things to play on on a mountain bike. It’s basically the best, and even though it’s a three hour drive from where my parents live in Ohio it is ALWAYS worth the trip when we are here visiting. But this blog post isn’t really about Ray’s… {{If you’re like WHAT is this magical bicycle wonderland you have described, pllleeease don’t leave me hanging like that let me direct you this video where you can learn all you wanted to know and (probably) then some.}}

No, this blog post isn’t about Ray’s at all. It’s about me. Which, I guess, is an apt description for most of the blog posts I write (why do you guys put up with me?).

But here’s the thing — I can use our annual Ray’s trip as a bit of a barometer for my mental state over the past few years, and well, the story that this tells is pretty damning.

2015 — determined to teach myself how to jump in one day, spent four hours lapping the same jump line

2016 — stressed about the fact that I hadn’t ridden jumps for a month (dirt jumps are not plentiful in Ohio), went to Ray’s with the goal of learning how to jump in one day (again), spent four plus hours lapping the same jump line (again)

2017 — didn’t even go because my knee was so messed up, Macky went without me.

And then there was this year.

I didn’t set goals. I just went. We filmed a video for our youtube channel and collaborated with our friend Bobo for a video on his channel. I accomplished some of the things I wanted to do — clearing the transition in the skate park, finally getting the longest skinny after 15 tries — and didn’t accomplish some other things I sort of wanted to do — like doing a 180 turn on the skate park wall. That one I’ll save for another day. And somehow, miraculously, I was totally okay with that. I didn’t obsess on any one feature. I celebrated the things I did accomplish, even when I felt like I *should* have gotten them on the first try. Better 15th try than never, right?

Oh, and I cleared all the jumps on that dumb jump line on my second run through, which I guess tells me two things:

1. I have progressed
2. HOLY SHIT THINGS ARE ACTUALLY EASIER WHEN YOU DON’T STAKE YOUR ENTIRE SENSE OF SELF WORTH ON THEM OMG WHO WOULD HAVE THOUGHT.

I walked away from several things at Ray’s that 2014-15-16 me probably wouldn’t have been able to leave well enough alone. Why? Well, partially because my priorities have shifted and we were there first and foremost to shoot a video. But that’s not the whole truth. The whole truth is a little more complicated, and it has something to do with my shifting definition of determination. In the past, I might have defined determination as NOT EVER GIVING UP, but I’ve realized recently that determination can take many forms. And unfortunately, sometimes determination and stubborn stupidity are a little hard to tell apart. I learn best when I’m having fun and when I’m open and receptive to trying new things. In other words, I learn when I’m flowing not when I’m frustrated and overthinking every little nit-picky thing I am doing. On previous trips, my determination to get better EVERY SECOND OF EVERY DAY overrode any common sense I might have had and I rarely sat with myself and asked the question: “are you enjoying this right now? Is this working for you?”

Determination doesn’t always have to look like beating your head against a brick wall. Sometimes it looks like walking away and trying to find a ladder.