Here’s a revelation I had recently: it’s time to get over the expectation of thinking I “should” be able to ride everything at an enduro race without being scared or intimidated.

When I first started racing enduro, I had this vision of a future where I would be able to show up at any race and just race. You know, focus on going fast instead of bugging out about one feature or another. Back then I did a lot — and I mean A CAPITAL LOT – of bugging out over things, partially because my skills weren’t that great, and partially because I was just prone to bugging the eff out. 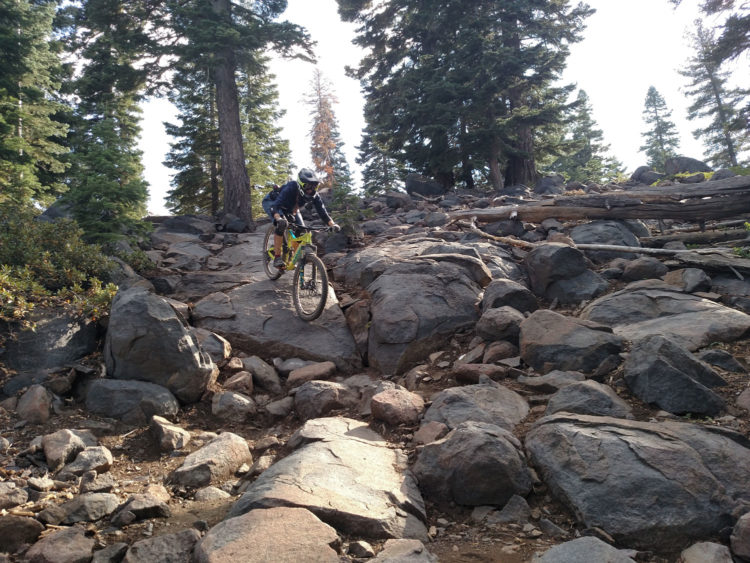 here are a few rocks that stressed me out once

Over the past five years, I have improved exponentially both skills-wise and mentally, but an annoying thing has happened — as I’ve gotten better, so has everyone else, and the courses have gotten more and more challenging. Enduro was a bit of a baby sport in the US back in 2014 and that’s the problem with being a baby racer in a baby sport: it grows with you.

As I got better, enduro courses got harder, and yet still, my expectation of being able to ride everything confidently grew and grew. After all, I had been doing this for so long, why was I still bothered by this rock or that jump or what have you? Shouldn’t I be over all that? I am realizing now that judging myself by this moving bar was probably a huge factor in the burnout that nearly drove me away from racing in 2017.

Last year, as you know if you’ve been following this blog for awhile, I changed my approach to racing. While this was a good thing in nearly every way, I didn’t push myself much skills-wise in 2018. This was okay — necessary even — and despite (or perhaps BECAUSE OF) not “pushing myself” I still made some huge strides with my technical riding. But the reality is that most enduro races I did in 2018 did not push me too far out of my comfort zone technically. I actually could race everything and I had very few moments of freaking out over a certain feature. Until, of course, I went to a few Enduro World Series races at the end of the year and managed to absolutely LOSE MY MIND over one particular rock section in Finale Ligure. A sign that perhaps, despite a much better year, this particular mental pattern was not completely behind me.

Fast forward to this past weekend, pre-riding for the Grand Junction Grand Enduro, when I found myself on the very cusp of a meltdown. There was a rock A-Line I didn’t want to ride. But more than not wanting to ride it (because I was fairly certain I could ride it, I just didn’t like it), I didn’t want it to be on the course. I didn’t want to have to face it and the fact that, after all this time, all these years, all this skills work, I still am showing up to regional races and balking at technical features. I didn’t want to face the fact that I still have not arrived at that point where I can show up at a race and just race and not be so damn intimidated by a pile of rocks.

I rode the line and it was fine, but I was unhappy about it, an unhappiness that I have to admit had nothing to do with my skills or that line, and everything to do with my expectations and what I think riding certain features says about me. Later I got to thinking, and I realized something: what if I was actually able to let go of that expectation of being able to riding everything easily and without being intimidated? What if that wasn’t the goal? What if I showed up to enduro races not just accepting but seeking that challenge? What if I saw that challenge as the WHOLE DAMN POINT, instead of seeing it as this ugly part of the experience that shows how unprepared and unworthy I am of being a pro racer? What if I completely let go of of the idea that I will ever be able to show up to an enduro race and not be scared of at least something?

I say I am in this bike racing thing for the challenge of it. What if I lived that?

3 thoughts on “What if being scared is the point?”