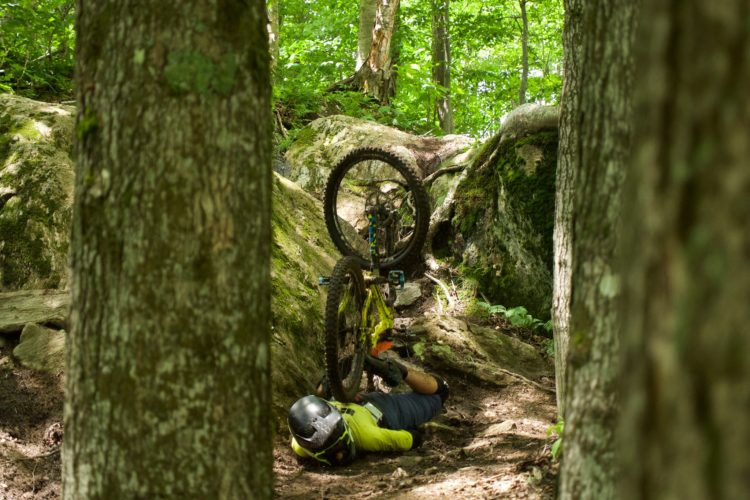 Here’s a question I get a little too often: How on god’s green earth do have so many photos of you crashing?

Because, let’s be real, I have an archive of semi-professional photos of me falling on my face, and contrary to popular belief, it’s not because I crash all the time. In fact, I’ve done way less crashing over the past two years, yet my very best crash photos have all been from this period. Why? Because I’ve figured out a few techniques that insure my crashes are both epic and captured on camera. Here’s a five step plan so you, too, can be this cool.

1. Get over the front end of your bike. No swinging off the back, no sitting on the rear tire. Ironically, this is actually good riding advice, and it will make you crash less in general, because you’ll be in control of your bike and less likely to slide out in a corner or get catapulted on a jump. That said, when you do crash (because, say, there was a loose rock in the trail — see below — or some other uncontrollable circumstance) it will be all the more epic, because there’s no where to go but, um, forward.

2. Commit. Again, good riding advice that is also good crashing advice. No one wants to see a photo of you crashing because you brake checked and accidentally rolled off a drop (okay, I lied, I totally want to see that photo but you get the point). Committing fully to the obstacle will increase your chances of riding it cleanly, or, if everything goes to shit, it will at least increase your chances of getting a photo of your body turning into a human torpedo. Win-win. Sorta.

I was just thinking "I'll never use that multiple photo thing" and then I remembered this sequence from @felipefariasr from the @world_enduro in Chile last year. I posted this first photo back then but I think we can all agree that it's better in it's entirety 😂😂 swipe left for some carnaaaage 😝

3. Don’t stick out your arms or do that tuck and roll nonsense. Boooooring. Okay, from a survival perspective, this is terrible advice, but from a “man you won’t believe how many likes this photo of me eating rocks got on Instagram” perspective, it’s gold.

Pro tip — when riding through narrow chutes, try to keep your bike parallel to the walls instead of perpendicular. It makes it much easier to fit. #thisisnothowyoudoit #thisonehurt #jerryoftheday

4. Save your crashes for those challenging and technical features where everyone is sitting around with their cameras out. And make sure you let all your buddies go first, and give them time to get their phones out and prepare to capture your kodak moment. Alternatively, make sure you have a good buddy with a gopro following you at all times, because as evidenced by the video below, SOMETIMES YA JUST NEVER KNOW.

How to crash in spectacular fashion on flat ground at 2mph, a tutorial 🙈🙊 #whathappened #soembarrassing #joeyoftheday

5. Best yet, crash in a race. Preferably in the most technical part of the track where all the spectators and media crew are circling like sharks that smell imminent carnage. Who are you not to give them what they’ve been waiting for? This is the best way to get professional crashing photos, or, ahem, hypothetically, end up on Redbull TV while eating a helmet’s worth of dust.

Today's installment of #sydsgotskills. I think I'll call this one "starfish" or "why I have an icepack on my jaw three days later" but feel free to submit other caption suggestions in the comments ⬇️⬇️ . In all seriousness, this one hurt and I'm a little embarrassed about it but at least @macebond007 was on hand to document the moment, and it's healthy to have a good laugh at yourself every now and then even if it makes your jaw muscles cramp.

*No Syds were seriously harmed in the making of this blog post. Somehow.*