I published these as daily posts on my Instagram account, but I decided to repost them here for those who aren’t on social media (or those who want to read them all in one go). Enjoy! 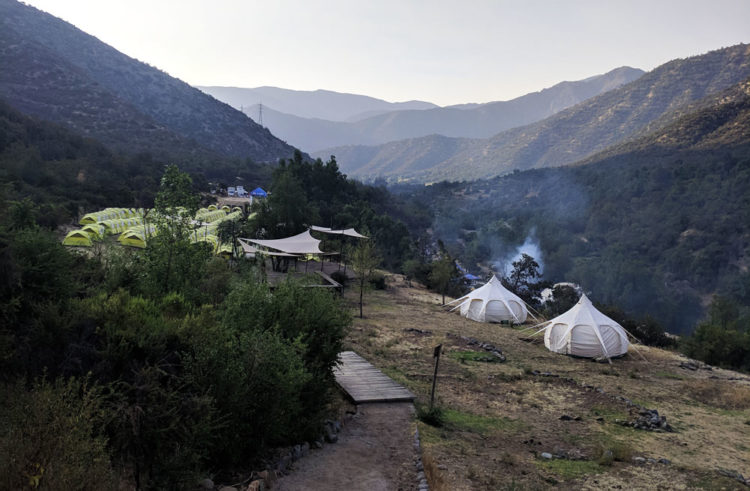 Andes Pacifico Day 0 – This was the view that greeted us when we arrived at the first race camp outside of Santiago, Chile. The excitement was palpable as 110 racers searched for their tents, assembled their bikes and got to know one another in a mishmash of languages, primarily English, Spanish and Portuguese. 18 nationalities, but only one universal language needed — love of MTB. The evening was a blur of meeting new friends and feasting on a Chilean parrillada (BBQ) at 9:30pm ( this is early for Chile, btw), while also trying to puzzle out the logistics for the first race stage of the season the next morning. Where do we fill up water? When do we get timing chips? How do we possibly sleep on these cots? Is this snoring going to go on all night? Etc. Etc. I didn’t feel like I was nervous, but maybe I was, because I barely slept at all, tossing and turning and stressing about the next day’s stages, which I knew would be some of the most challenging of the week. I think you could say I was just a *little* intimidated by the infamous anti-grip. 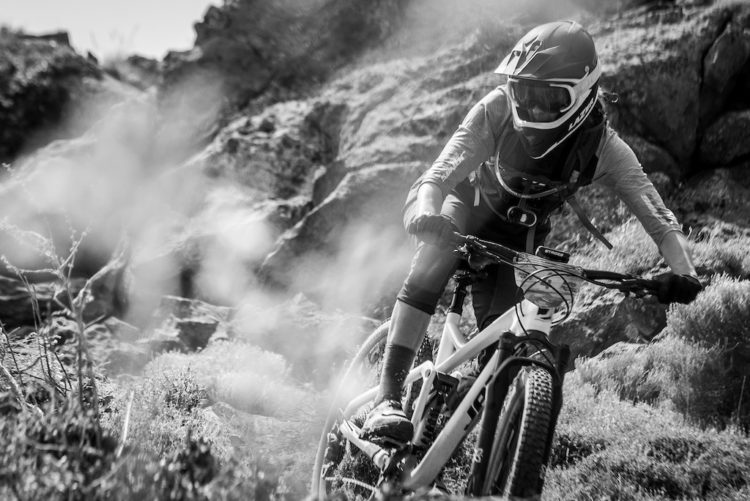 Andes Pacífico Day 1 – La Parva Ski Resort above Santiago. 12,000 feet above sea level. Epic moonscape and axel-deep anti-grip dust and sand. Some of the world’s sketchiest trails (according to me). This was the only day where I would have any familiarity with the trails, because two of the three stages were ones we raced in 2016. Did this help me? Nope, instead it turned me into a nervous wreck as I recalled helpful tidbits like “oh this is the stage where I was terrified the entire time and I went OTB into the bushes at least three times!” But a lot has happened since 2016, and I found myself far more capable both mentally/emotionally and skills/fitness wise to tackle the Chilean anti-grip. I still had to get off and walk a section on the second stage, and I still had to stop and rest my hands during the third stage — the relentless Festival de Curvas — but I avoided any major crashes or issues. Both of these stages dropped around 3000 feet (yes, EACH) over 3-4 miles and took me close to twenty minutes per stage. And yes, I spent the entire time on my brakes and burned out both my front and rear brake rotors IN ONE DAY, and yes, I definitely felt a little rusty on these descents after a winter spent on the road bike. But, I also felt good. I also had fun. And I finished the day with a smile on my face and sitting in 5th place. I knew I had ridden conservatively, and that I probably could have gone faster in many places, but I also knew that I needed that positive, safe experience to set myself up for the rest of the week.

We finished the day at 4pm — plenty of time to enjoy a Chilean Completo (hot dog with avocado, tomatoes and other toppings!) and sit in the creek. Little did we know that this would be the last time we would have any time whatsoever to relax after the race day. The rest of the week would be full on, full time. 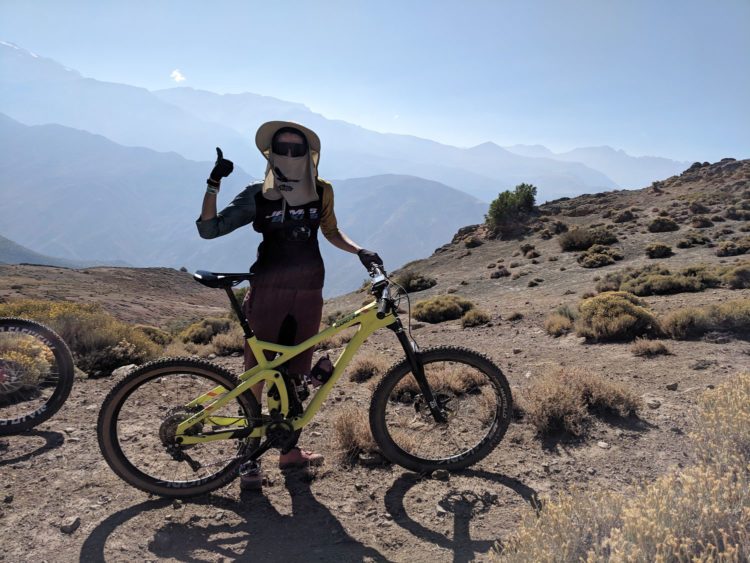 Andes Pacífico Day 2 — Nido de los Condores (Condor’s Nest). This day began with a steep hike-a-bike and yet another twenty minute stage. Usually I love long enduro stages, but I will admit that I began to yearn for short stages, or at least some pedaling or flat sections where I could let go of my brakes for 30 freaking seconds without dying. My arms and hands were in so much pain by the end of this stage that I was simply hanging on for dear life. I played cat and mouse with Vale, catching her on the climbs, only to have her come flying past me while I extracted myself from yet another prickly bush. This was definitely my hardest day, and my hardest stage of the race. I simply could not get my act together and I finished feeling pretty discouraged. Luckily (sort of?) we had a long break after this first stage while we were shuttled up the next stage. Two and a half hours of steep, cliffside, jeep track made this the most epic shuttle of my life (only to be topped later in the week). Luckily our driver, Jose, was up to the task, so I was only terrified when I unwisely peered over the edge. One of the trucks ahead of us exploded a tire and since the road was too narrow to pass, we all had to wait while they fixed the flat. We didn’t end up starting the last four stages of the day until past 3pm. However, by this point, I had forgotten my decimation on the first stage, and I really enjoyed these stages. They were moto trails, so lots of whoops, bumps and high speed sections. The flatter, fast sections allowed me to get off the brakes and rest my hands, which made them much more enjoyable. We finished the day at 8:30 pm and the race organizers greeted us at the bottom of the final stage with empanadas. Then we all piled into the trucks to drive to the next campsite. We arrived at 9:45pm, just in time to grab a quick shower before dinner at 10:30 (still early for Chile). By this point, both Macky and I had given up on the cots, and started sleeping on the ground with a deconstructed bike box as a mattress. We slept great, thanks for asking.

I was too tired to check the results, which was probably good, because my first stage drama had caused me to slip back into 6th place. 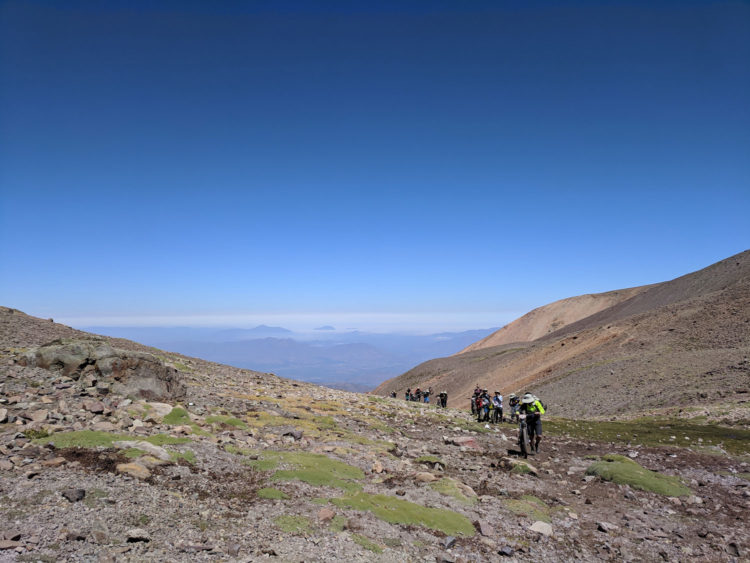 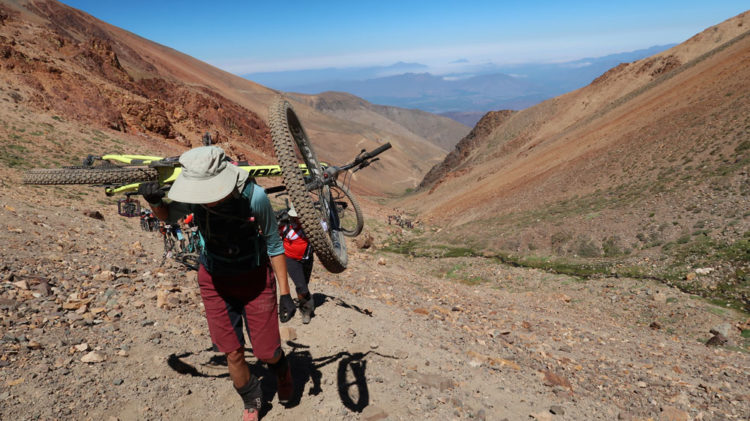 Andes Pacífico Day 3 – Valle el Arpa. Another epic day in the mountains. First, we jumped in the trucks and drove for 2 hours on rough roads to a high alpine refugio. Only then did we begin the 3.5 hour transition. The first 45 minutes required carrying bikes on shoulders and scrambling over rocks to a distant saddle, that naturally turned out to be a false summit. So did the one after that. Aaaand the one after that.

A group of Chilean huasos (cowboys) drove a herd of free-range horses through our midst, a bizarre clash of modern and ancient forms of transportation. And at this point it was pretty clear whose method was better suited to the terrain (hint: it wasn’t us). After three hours of pushing our bikes, we arrived to what felt like the top of the world. Although, to be fair, it didn’t really feel like this world at all. More like Mars or some other galaxy entirely.

We started the first race stage at 4pm. Yes, 4pm. These were my favorite stages and my best day of racing, which is, I think, a testament to the resiliency that I have developed over the past 5 years of enduro racing. There was a time when starting at race day at this hour and knowing we wouldn’t finish until practically my bedtime and that we would have to get up the next day to do it all over again would have thrown me for a serious loop. And yet, these stages — fast, rocky, lots of punchy climbs — ended up being my best finishes of the race. I was 2nd on the first stage, 3rd on the second and although I encountered some traffic and minor crashes on the final stage of the day (6th), it was enough to move me into 4th overall. I finished the day stoked, exhausted and ready to pass out on my cardboard mattress. (We slept great, thanks for asking). One of the many, long, dusty shuttle rides.

Andes Pacífico Day 4 – Valle Hermoso. Out of the Andes and into the coastal range. Smaller mountains, spikier plants and much hotter temperatures. This day was a mixed bag — it had my favorite stage of the entire race (the rocky, fast second stage), but it also had what felt like a totally inane amount of time spent in the trucks, lumbering up terrifying jeep roads with death-defying cliffside switchbacks. At one point our truck got stuck and we all had to rock back and forth to help the wheels gain traction. I started to wonder if maybe I was in the wrong sport when I realized I would have rather ride up some of these hills TWICE than ever go up them in a truck again. Thank goodness I’m racing BCBR later in the year, a race that is sure to knock that silly notion out of my head.

Despite feeling antsy with the shuttling and the waiting, I have to admit that these were some of the best stages of the race, and that at the end of the day it was worth it. And it was also some of the best racing I have ever done. I’m not sure why, but I felt calm, collected, and fast. The aches and pains I felt in the beginning of the week began to resolve themselves. This magical feeling of adaptation mid-race — that moment when you turn the corner and you feel like you could do this indefinitely (eat sleep ride repeat repeat repeat) — that is the appeal of stage racing. That is why I do this.

Andes Pacífico Day 5 — Zapallar/Cachagua. The final day. Both Macky and I woke up grumpy and out of sorts. Even though we had developed a good routine over the past few days, everything seemed to take longer and we struggled to get to the shuttles on time. Yesterday I had felt like I could keep racing forever — but now, not so much. I realized that, while the result for this kind of race is truly irrelevant, I really did want to hold on to my fourth place finish. I had a 3 min gap to 5th place, but I also knew that anything could happen.

And I was right to be concerned, because things went haywire on the very first stage. A minor crash in the first few minutes of the first stage pulled out my dropped post cable, leaving me with a post that went down when I sat on it and up when up I stood up (i.e. exact opposite of what you want). I panicked for a moment, and then decided to just go for it. Full XC on a steep, sketchy loose stage. And you know what happened? Nothing. I mean. It was terrifying. But, thanks to Lee McCormack’s voice in my head going “HIGH HINGE HIGH HINGE,” I barely lost any time at all. The final stage was a straightforward sprint to the beach and then it was all over, and yes, for what it’s worth, I kept that 4th place.

We jumped in the Pacific ocean, compared tan lines (sunburn lines, let’s be real), gave out so many hugs, drank a piscola (#onepiscostillnodisco?), ate what felt like an entire cow and fell asleep to the thumping of the speakers. It was glorious. It was just a race, and yet… You live a lifetime in five days at a race like this, and forge the kind of new friendships that usually take years. Could it really be the end, just like that? 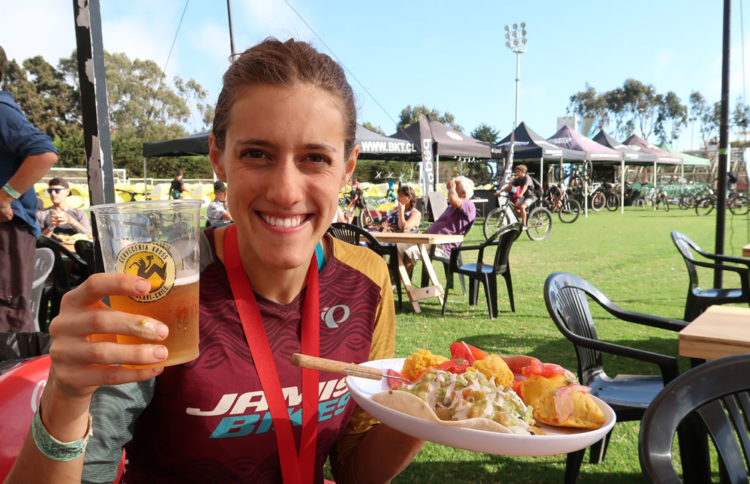