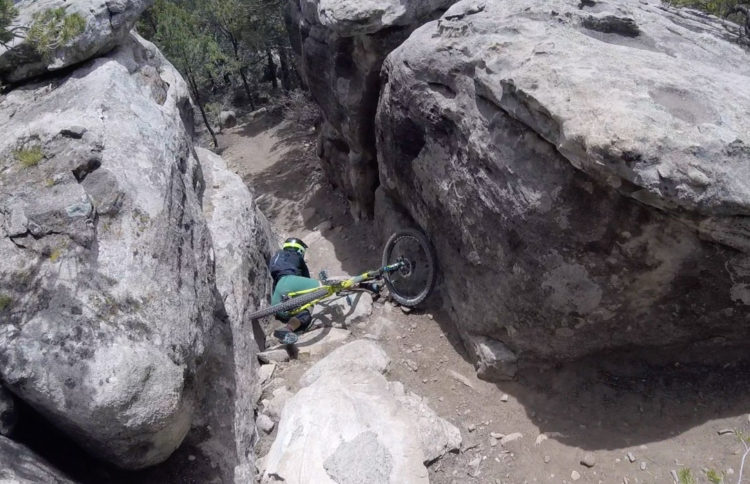 I lay underneath my bike in a crumpled pile at the base of the infamous Jagged Axe chute, kind of hoping I had broken something. Not anything serious, mind you, just something to justify not racing on Saturday and sleeping for the next three weeks. My shoulder hurt from slamming into the side of the rock wall. Maybe it was dislocated? Excellent.

I dragged myself out from underneath my bike and assessed the situation. Nope, somehow despite my faceplant into rocks from five feet up, I was fucking fine. Typical. And so I sat on the side of the trail and bawled my eyes out, because I had crashed on something so wildly within my abilities, because I would still have to do this damn race, because I felt like something had sucked all my life force out with a straw, because I felt like I was giving up on myself and my career as an athlete.

And then I pulled myself together and finished practice and then the race because apparently that’s what I do — gut it out, whatever it is, no matter how loudly my body is screaming at me to stop.

Considering that crackin’ good attitude, my race at Glorieta (BME #1, NES #2) was shockingly non-disastrous. I managed to stay upright and even have a little fun, at least on the bits where I was pointed downhill and wasn’t feeling my heart slamming about in my ears. But it was uninspired, and I was exhausted.

I basically spent the rest of Memorial Day weekend glued to the couch at Macky’s parents’ house, and finally dragged myself to the doctor (kind of a pain in the ass when you don’t live anywhere and have no primary care physician) for some blood tests. This was kind of a big step because I have a tendency to internalize this sort of stuff and assume that I’m doing something wrong, or that I’m just doing too much, or that it’s all in my head — not that something’s physically wrong with me.

The blood tests revealed that I’m fighting off a viral infection, and while it’s great to know that hey yes, something is wrong, and it will get better, it was also kind of a frustrating diagnosis because there doesn’t seem to be much to do about it other than sit around and drink lots of water, and the time frame is pretty open-ended. I’m not a very patient person in the best of circumstances, so this could be difficult.

I think the most important take-away from this situation is that if you keep thinking to yourself “I know I’m better than this,” then, well, maybe you are. For the last three races, I’ve been constantly berating myself — like, seriously Syd, is this all you’ve got? Is this really the best you can do? If I had listened to that, instead of internalizing it and assuming I was the problem, I might have figured out what was going on earlier and not wasted nearly as much time and energy thinking I just sucked at riding bikes. For the moment, however, there’s not much I can do about it, other than sleep and drink lots of water and write dramatic blog posts like this one (sorry). Hopefully I’ll be up and rolling soon, and in the meantime I’ve certainly learned a thing or two about when not to push myself.

2 thoughts on “Gone Viral, an Update”