I stood at the top of a big rock drop in Glorieta earlier this year, eying up the landing and wishing I was wearing a full-face helmet. And then I started thinking about the absurdity of that thought. Any crash off this drop would be B.A.D in all caps. Sure, a full-face might save my teeth, but I could still break any number of bones, I could still get a concussion, and I could still get pretty scraped and dinged up. (I am a card-carrying member of “team no elbow pads”). So why should wearing a fullface make me feel safer? The only thing that should logically make me feel safer is confidence that I can hit the drop safely and properly.

Another anecdote. A few weeks ago I rode the bottom of South Boundary Trail in Taos, NM without kneepads for the first time in ages. I wasn’t wearing kneepads because we had climbed up a trail called Ojitos, which is a brutal climb. Also it was 100 degrees. Also, SBT is by no means a trail that “requires” kneepads. So I didn’t wear my kneepads. NO BIGGIE. And yet, I definitely went slower on the descent. Not that it mattered particularly, because we were just out for a chill ride, but I probably dialed it down 5-10%. On the straight fast sections, this probably meant the difference the difference between, say, 25mph and 22mph. Which, when you think about it, is kinda hilarious. Crashing at 25 miles per hour on a rocky trail is BAD NEWS BEARS even if you are wearing knee pads. Obviously, when I am riding SBT with kneepads, I do not think I am going to crash when going 25mph. If I did, I would slow down. So why does taking that layer of protection off my knees make any difference whatsoever?

It shouldn’t, but it does.

For the past two years, I have had a very on-again off-again relationship with my elbow pads. I have tried many brands of elbow pads, and pretty much universally hated them all. The POC VPD System 2.0 that I wore last year were the best I’ve ever had, which is to say that they didn’t fall down mid-race run and they weren’t so dreadfully tight that they cut off all my circulation. But there was still a problem. I only wore them for certain kinds of races and rides, and my decision making was solidly illogical. Scary slow-speed drops? Elbow pads. 40 miles per hour down a tiny sliver of singletrack? No elbow pads. Wet rocks? Elbow pads. Technical Moab chunk rock? No elbow pads. By the end of last year I started to detect a pattern. I only put my elbow pads on when I was scared. It became a sub-conscious signal that I didn’t trust myself. Feeling sketchy and intimidated by the course? Put on your elbow pads. I have a sneaking suspicion that by the end of last year, putting on my elbow pads was actually making me more likely to crash, as I was effectively telling myself that I didn’t have confidence in my abilities.

This year, I’ve retired my elbow pads entirely, and instead of piling on the protection when I’m scared, I’m flipping the script. I’m reminding myself that I KNOW I can ride this terrain without crashing. I’m focusing on riding confidently, instead of focusing on mitigating the effects of a nasty crash. I’m telling myself “you got this” instead of “you really need to put padding everywhere because there’s like a 99% chance you’re going to eat shit.”

I didn’t wear a full-face for the Big Mountain Enduro in Glorieta this spring and I got a certain amount of flak for it. That said, I don’t regret my decision — and not just because hindsight is 20/20 and I didn’t knock out any teeth, but rather because wearing a half-shell for this technical race forced me to be confident in my decisions. It forced me to have faith in my abilities, as opposed to faith in my helmet’s abilities to protect my face. 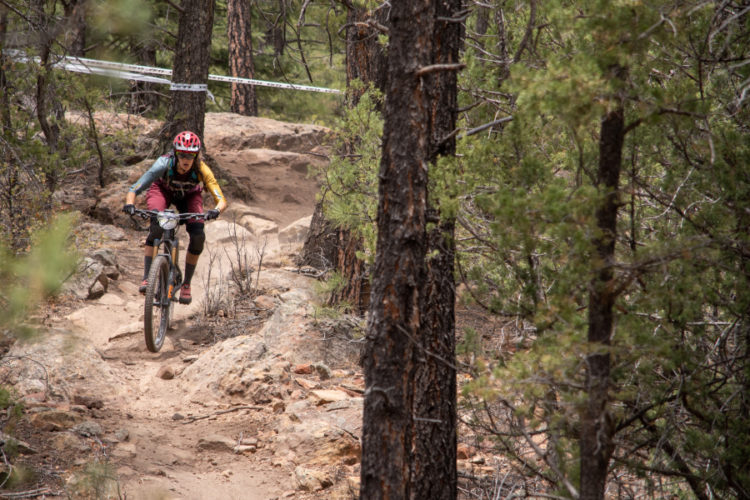 This doesn’t mean it was necessarily the best decision, and it doesn’t mean I will never wear a full-face again (I wore one for races in both Crested Butte and Angel Fire over the past few weeks), but rather that I think I needed that reminder.

My confidence comes from my abilities, not my (admittedly very good) protective gear. My full-face isn’t what makes me safe on a bike. My skills, experience and decision-making do that, and they do it way better than any face-shaped piece of plastic.

[NOTE: There are, of course, limits to this philosophy. I’m certainly not suggesting riding a bike without a helmet or even racing enduro without knee pads (knee pads are great!). My point is more that maybe we need to make good decision making and confidence JUST as important as helmet-wearing.]

2 thoughts on “My Full-Face Doesn’t Make Me Safer”