It was a hot day in mid-July of last year and we were standing on top of the Valmont dual slalom track. I had been running laps on the track for nearly half an hour trying to shave off tenths of a second and I was getting frustrated. For the past two years that Lee (Lee Likes Bikes) had been coaching me, we had spent nearly all our time in a parking lot. We practiced corners and bunny hops and corners with bunny hops in the middle of them. We practiced pumping and jumps. We spent hours discussing the physics of perfect riding. I loved this intellectual approach and I loved how nitty-gritty we could get in this quest for perfection. But there was one problem.

And so, there we were, at the top of the dual slalom course, not working on skills at all, but trying to get me angry. Trying to get me to care. And it worked. After about a million runs I finally got annoyed enough that I stopped thinking. I stopped worrying about my cornering form or whether I was casing the jumps. All I wanted was to break 27 seconds on that stupid little stop watch so that I could stop. And eventually I did just that. It was a breakthrough and both Lee and I knew it. The question — and this is still the question — was how to harness that. 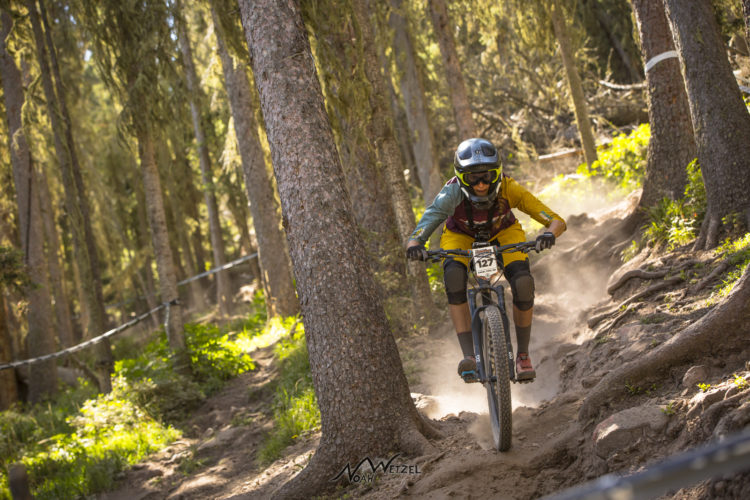 Before this past weekend’s race in Angel Fire I wrote down three goals:

1. Podium Finish
2. Race Aggressively
and (in all caps)
3. GIVE A SHIT

This sounds bizarre, but over the past two years, I have really struggled with #3. Last year it was far too easy for me to get into the start gate and just stop caring. Why? I don’t know. Maybe I’m just not that competitive. Maybe I am super competitive and not caring was the only way I could live with my results. Maybe some combination of both. Or maybe I had just been through the wringer with three years of nasty crashes and lousy luck and giving a shit was just one stick too many for this broke-ass camel. I don’t know.

All I know is that last year I couldn’t do it. That’s why I took so much time off this winter. That’s why in October of last year I wasn’t sure I would ever race again. That’s what I mean when I say I was burnt out. I could not, no matter how hard I tried, stand in that start gate and give a shit. So putting that as one of my goals wasn’t an idle afterthought. It was the whole point.

I didn’t end up on the podium in Angel Fire, although I was within striking distance in 7th place. But I did race aggressively (perhaps a bit too much so, as I ended up taking a wrong turn on the first stage and having to re-run it — whooooops), and I did give a shit and I even continued to do so by the end of the second day when I was pretty beat up and exhausted. And this wasn’t easy — in the days leading up to the race, I had to check myself a few times as my mind automatically slid towards apathy and negative thoughts started to creep in. It was, to be honest, a constant battle to keep my head in the game, and I think that’s part of the reason I was so exhausted by the end of the second day. However while it was certainly more effort — it was worth it. Caring actually made racing more fun (as opposed to less, which I had been afraid of), and I finished much happier with my result and the weekend in general.

There is, of course, room for improvement. Finding that optimal balance of aggression and flow is hard, but this is, at least, the closest I’ve gotten in awhile, and I’m pleased with it. And who knows, maybe at the next race I’ll find a mental place that allows me to go hard while ALSO paying attention to the course taping…