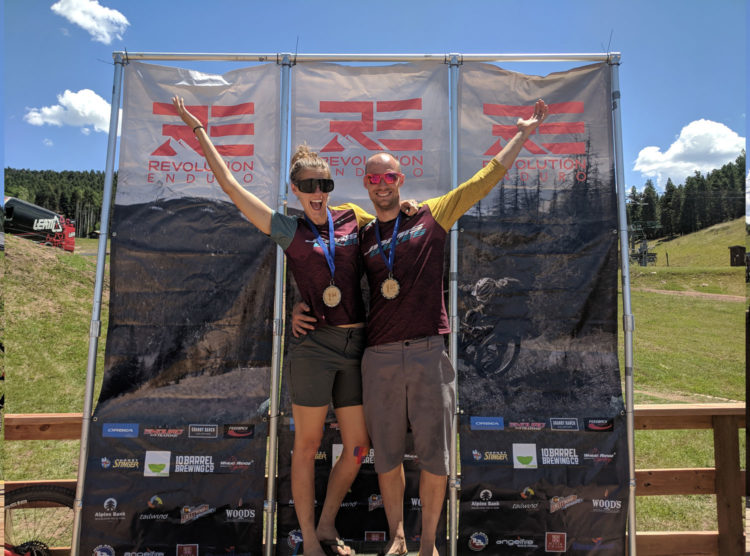 This past weekend, I won the Revolution Enduro in Angel Fire. This was A) awesome and B) made me realize that, wow, I have a lot of insecurities about standing on top of the podium. For starters, before this weekend I had never won a pro enduro race — actually I’d never won any sort of enduro race at all. This is probably 90% a factor of the sorts of races I have chosen to race over the past five years, and 10% caving under pressure or just having terrible luck when I have had the opportunity to win something.

Sometimes I’ve wondered if I just don’t know how to win. Maybe I’m just too accustomed to losing? Sure, I won a handful of collegiate XC races back in the day, but this usually amounted to riding by myself through axle deep Vermont mud for several hours and crossing a finish line where the only spectator was the guy with the stop watch and clipboard. If there were podiums for these races, I never got a chance to stand on one, probably because I was already on my way back to campus to speed-read 300 pages of medieval Spanish literature (#nerdalert). The point is, I haven’t won many bike races.

So, I finally won a pro level race this past weekend. And, naturally, the minimizing started almost immediately:

There was only one other pro woman.
This wasn’t a real pro race.
You only won because no one else showed up.
This doesn’t count because it wasn’t competitive.
You’ve been racing pro for five years and this is what it took for you to win a race.
This doesn’t mean anything.

It’s easy to go down this route, because factually, I’m not wrong. No, this race wasn’t competitive. Yes, there were only two of us in the pro class. No, none of the faster pros in the region showed up. Yes, the closest woman to my time was more than five minutes back. The problem with this minimizing isn’t the logic of it, but rather the lens. I’m focusing on things that are entirely out of my control. I’m focusing, again, on what other people are doing — not showing up — instead of what I was doing — showing up and racing my ass off, even though there wasn’t any competition.

This kind of lens can be hurtful in the long run, because I already have a tendency to minimize my accomplishments and blow my failures out of proportion. If I start creating patterns of saying “this result isn’t worth celebrating because x, y and z” the question is, where does that sort of thinking end? I remember a friend telling me that it took her years to celebrate her national champs win because she “only” won because someone else broke a chain. But here’s the thing — chains break. Shit happens. It still counts. And the reality is that if you minimize your accomplishment at a local race, you’ll do it at national champs, too.

Saying “I only won because no one faster than me showed up” is possibly the most obvious statement in the world. That’s how winning works. Even the most competitive mountain bike races in the world are often a factor of who shows up and who has good luck and who has a mechanical or a crash. The first step is always showing up, and the second step is keeping your shit together, and neither of those steps should be underestimated.

Telling myself that this win “doesn’t mean anything” misses the point entirely. This is bike racing, and none of it means anything beyond the meaning we assign to it.

The reality is that, no, I didn’t have any competition this weekend, but I still showed up and went hard on six stages. I fought the urge to slack off or “play it safe,” and instead I tried to #giveashit on every stage. And yeah, at the end of the weekend, I won. Which is rad, and totally okay to celebrate. I’m making an effort not to minimize this victory, not because it “means something” (it doesn’t – they never do), but rather because I don’t need practice talking myself down or delegitimizing my accomplishments. I don’t need that. It doesn’t help. All I need is to crack open the (metaphorical) champagne, say “hell yeah I won,” and then keep working hard for the next one.

4 thoughts on “Reflections on Celebrating a Win”