Alternative titles include: “Why you should never look at a gap jump from the side” or “How to Overanalyze the Living Daylights Out of Literally Everything in Ten Easy Steps”

Last time I raced the Enduro World Series round in Ainsa, Spain, three years ago in 2015, I threw myself into an absolute tizzy over the prologue stage, an urban descent through the Ainsa Castle. I didn’t want to do it, and I was absolutely certain that I would slide out on cobblestones, go head first off the [small] wooden drop or otherwise come to a sticky end before I even got to the race. Honestly, I don’t really remember exactly why I got so wound up about this, although I suspect it had something to do with the fact that you weren’t allowed to practice the stage beforehand, it was mandatory, and there was a “gap jump.” The latter was about one foot wide, and I’m not sure it would have been physically possibly to mess it up, even with no skill whatsoever, even being as big of a gaper as I was in 2015. But I certainly worried about it. I worried about it a lot, along with about 100 other negative scenarios I had cooked up. In fact, I was a pretty miserable grump about the entire thing.

And you know what happened? Absolutely nothing. In fact, despite my best intentions to hate the entire thing, I kind of had fun. 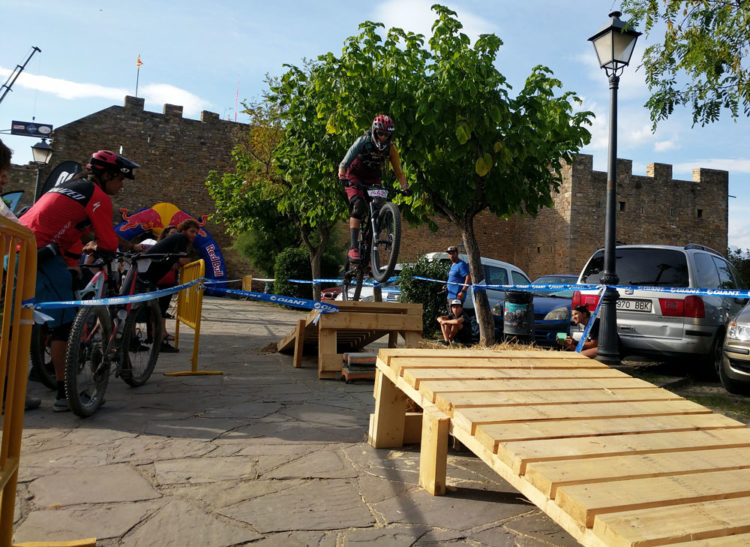 Fast forward three years, and I was actually really looking forward to the urban stage. Until I saw the new gap jumps, and immediately regressed to 2015. This year’s course designers had upped the ante with two wooden jumps, with gaps somewhere in the six to eight foot range. I quickly calculated that to be 600 to 800 percent increase from three years ago, which seemed really damn unfair. I mean, I wouldn’t have minded 2015’s course at all now, and then they had to go and do this. Plus, to make matters worse, I didn’t really get a very good look at these treacherous features, as the course was already roped off before we got back for the race, and I had counted on another twenty minutes or so to stand by the side of the jump and psych myself up (or out?).

“We’re not coming back to this race in another three years,” I griped to Macky. “At this rate, it’ll be forty foot gaps and hucking off rooftops by then.”

The source of my irritation was pretty obvious to me, right from the get-go. I knew I could do these dumb jumps, I just didn’t want to, at least not in this way. Not in a blind race stage, not in front of a billion people, not without a few times to roll-in and overanalyze and confirm that I was going the proper speed (which it turns out, was literally any speed at all).

I was pissed because I was faced with such an obvious dilemma of “suck it up and do the thing or disappoint yourself.” And I was also pissed because I didn’t want to be scared of a dumb prologue again, because I wanted to have fun at this race, because I wanted to enjoy this experience, and here I was acting like the weight of the world depended on a stupid wooden gap. Again. What happened to all the progress I’ve made it the past three years? One scary jump and it’s gone? You get to race through a freaking castle in freaking Spain and you are acting like it is a matter of life and death. Get over yourself.

As we pedaled back to our AirBnb to rest for a few hours before the prologue, I realized that I had to make a decision. I could spend the afternoon spiraling into anxiety, complaining about how it was totally unreasonable to put a gap jump in a blind race, and otherwise make myself miserable over nothing. Or I could just decide to hit the jumps and not think about it again until I actually rolled into the stage. At which point, I would just execute what I knew I was capable of doing, like I have every other time I’ve started a race stage this year. I would just do it.

I chose the second option, which I guess is how you can tell that I have made some progress since 2015. I hit the jumps and they were, as expected, totally, completely fine.

People ask me all the time how I psych myself up to do things that scare me, and I have (inadequately) answered that question a few times on this blog already (here and here for starters). This, I guess, is another example. I knew I could hit this jump on an empty trail, so I knew I could do it in a race run, with a thousand spectators, in a castle, on the other side of the world. The situation scared the shit out of me, but the jump didn’t, so I did it. This, I think, is the delicate distinction between self-actualization and pushing through fear. The former is doing what you know you are capable of, even though there are consequences or the circumstances are uncomfortable. The latter might possibly lead you to do something you shouldn’t. This is, for the most part, a difference of semantics, but it is one that works for me, and I’ve used it as a helpful guide.