You’re scared because you shouldn’t be doing it.

This is what I wanted to say to the woman in front of me, but I held back. I was leading a free group ride, which, as is often the case, had devolved into an informal skills clinic. This woman wanted to session a rock feature, and I wasn’t being very encouraging, because from an objective point of view, I didn’t think she should be doing it. She was scared, and upset that I wasn’t telling her she should totally send it, and then further upset that other women had ridden the feature. She felt that my role as a ride leader was to spot her and help her work up the courage to try the feature. I felt differently. I felt like my role was to keep everyone safe. 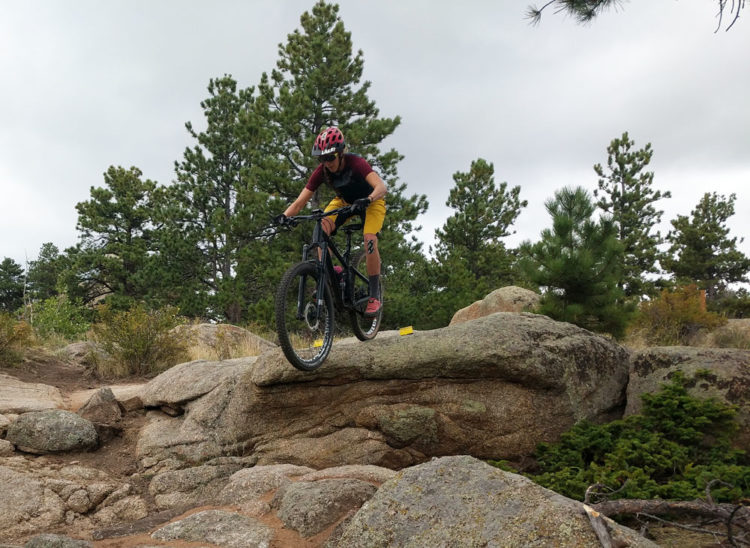 This isn’t the rock feature in this story, but you get the idea.

“I’ve wanted to do this for ages,” she told me, “and I thought I could do it with your help.” Implied: you’re supposed to be instructing me and now you’re refusing and I’m pissed.

At this moment I really missed my skills coach Lee (Lee Likes Bikes). This is exactly why Macky and I don’t teach formal clinics or private lessons on our own — we did do a skills clinic with Lee in October — because we need not only his skills but his thousands of hours of experience in telling people *NOT* to do things. Lee would straight up tell this woman what I didn’t have the guts to say — you don’t have the skills for this. Move. On.

And yet, here we were, arguing over a small rock feature, on what was supposed to be a casual just for fun no-drop group ride.

Me: No, it doesn’t scare me. I’ve ridden lots of things like this. But you shouldn’t do it if you’re scared.

[In my head: It doesn’t scare me because I’ve ridden way worse things than this 1000s and 1000s of times. Because I’ve spent hours and hours and days and days and months and months working on my skills and it finally paid off. Because I’ve been racing professionally for four years. So, no, lady, this does not scare me, and no I do not have to psych myself up for it. But it’s not because I’m brave. It’s because I’ve put in the damn work and you’ve done maybe one skills clinic ever, yet you’re mad at yourself for not being able to do a challenging rock roll. GET REAL.]

Her: I just need to push through the fear. I’m such a wimp. I can’t believe things like this scare me.

Me: Why don’t you come back to this another day? It’s not going anywhere.

Me: Beating yourself up isn’t going to help.

On and on and on.

She never rode the thing. I don’t care that she didn’t ride the thing; in fact I’m pretty relieved that she didn’t. I can’t say I’ve never been this person — the person losing their damn mind because something scares them — I most certainly have — but this experience was a wake up call as to how AWFUL it is to watch someone else talk down to themselves, especially when you can see that they are totally unaware of how counterproductive this habit is. And I felt bad that she was using me as barometer of whether this feature should be considered scary or not. What scares us is a function of our experience. Nothing is “objectively” scary. What’s scary to a beginner rider is not scary to me. What’s scary to me, often isn’t scary to Macky. And what’s scary to Macky probably isn’t very scary to the guys that throw themselves off 75ft cliffs at Redbull Rampage. Perspective, and experience, is everything.

Mainly though, I was irritated, because I saw for the first time how this sort of negative self talk, beyond just being unpleasant to listen to, stands in the way of actual, useful progression. I was willing to offer this person helpful instruction on something that was at her level, but she was far too caught up in what she couldn’t do and what she “thought” she should be able to do, to take advantage of that. Ironic as it sounds, that sort of self-deprecating negativity is a way of protecting the ego, and I knew, watching this scenario go down, that I have been guilty of similar patterns far too many times.

I spent my first year of racing beating myself up for not being as fast as many of the women I raced with. I thought, for whatever totally addled reason, that I “should” have been faster, than I should be as fast as these women who had been racing and training for years. How insulting, I realize now, that I thought I deserved to be anywhere near their level. I hadn’t put in the work. I didn’t have the experience. I hadn’t earned it, so I didn’t get it. Simple as that.

If you want to get faster, get faster
How to get better at being bad at things
Stop saying sorry

6 thoughts on “This is Why You’re Scared”