EXCITING NEWS FIRST!!! I want to share that Macky and I will be leading a 2-day skills clinic with Lee from Lee Likes Bikes in Boulder, CO this October 6-7!! This clinic is going to be AWESOME. The first day will be at Valmont Bike Park, and the second day we will hit the trails and work on skills in real life trail scenarios. The clinic is capped at eight participants (with THREE instructors!) so you will get plenty of personal instruction. At this point, we’ve sold six of the eight spots, so the last two will probably go quick. And I would looooove to have some blog readers there :) :) ALL THE DETAILS HERE!

Okay, now I’m going to convince you that skills coaching really, really matters. For some reason, many mountain bikers don’t believe they need any sort of official instruction — you get faster by riding with faster riders and hitting bigger and bigger features, right? Well, yes and no. This philosophy isn’t necessarily wrong; it’s just inefficient, like teaching yourself to play the flute by watching YouTube videos. (Only it’s worth pointing out that mountain biking poorly has more serious consequences than poor flute-playing. I know because I’ve done both of these activities badly and only one of them left me with broken bones.)

With self-instruction, you might end up at the same level (if you’re lucky), but it will take a lot longer, and you’ll probably acquire some difficult-to-break bad habits. Macky and I have been working with Lee seriously for three years now, and it’s comical to me that I raced professionally for two years with no skills coaching. I don’t know what I was thinking, and if I had realized how much less crashing I would do with just a little bit of instruction from Lee, I would have started a lot sooner. 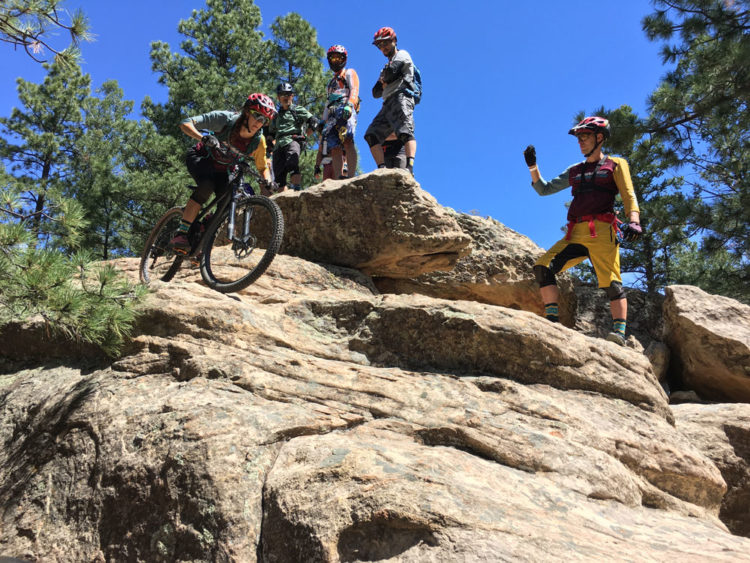 Macky and I led a group ride in Santa Fe this Sunday and stopped at the Chili Dog rock roll to demo proper form on steep rolls.

Here are 5 reasons mountain bike skills coaching matters (and will make a difference in your riding):

1. You don’t know what you look like on a bike. Chances are you think you look a lot better than you actually do. I am no exception to this rule. I definitely have moments where I’m like “that was rad” and then video footage shows otherwise. Unless you have way better than average body awareness, you probably think you’re in a much lower, more aggressive position than you actually are. Without a coach to provide some real time feedback, it’s really, really difficult to know what you’re doing. And if you don’t know what you’re doing, you can’t fix it.

2. There is a 90% chance you need to work on cornering. And it’s really hard to work on cornering by yourself. I would say cornering comes naturally to almost no one except maybe those annoyingly skilled people who grew up racing BMX. Assuming that’s not you, skills coaching is the way to go. There are a lot of different elements to proper cornering technique, and if I hadn’t spent months working on cornering in a parking lot (and getting critiqued by Lee!), I never would have been put all the pieces together on the trail. It takes time, practice and most importantly feedback from someone who knows what to look for, because, as was discussed in Point 1, you might think you’re doing it right, but you probably aren’t.

3. Proper riding form will make you safer, as well as more capable and faster (if you want to be). I’ve heard from beginner riders who are scared to take a clinic because they are afraid that they will be pushed out of their comfort zone and get hurt. I think this is a testament to the fact that there are a lot of not so great MTB coaches out there. If you feel like your skills coach is putting you in unsafe situations, the problem is the coach, not skills work in general. It’s possible to work on skills in a controlled, totally un-scary environment. In fact, that’s preferable because it’s hard (impossible?) to learn when you’re scared. Working on proper body positioning and safe braking with a coach will make you so much less likely to crash on the trail.

4. You will progress MUCH faster if you’re not getting hurt. The whole “if you’re not crashing, you’re not learning” spiel is bogus. In my experience, crashing usually makes people scared and discouraged. Sure, it’s nice to think that we learn from our crashes and don’t make the same mistake twice, but evidence points to the contrary. As humans, we’re pretty bad at making objective assessments of our own performance. Freak accidents do happen in mountain biking, but far less than we think — most crashes can be explained by bad body positioning, sketchy braking, lack of commitment and/or (the big one) bad decision making. Working with a skills coach can help you with all of these, because, as referenced in Point #3, they will help you work on skills in low consequence situations.

5. The things that will make you faster, more capable, and safer on a bike, are probably not the things that you’re practicing on your own. Before I worked with Lee, when I went out to “practice skills” I would usually end up working on manuals, wheelies, drops, hopping over logs, etc. Nothing wrong with this kind of play (in fact, it’s awesome!), but the reality is that I was working on flashy stuff while my basic skills were crap. I needed to be working on braking, cornering and basic position on the bike. When I started working with Lee I spent two months doing cornering drills EVERY DAY. I sent Lee videos and he analyzed them and sent them back, and then I tried to do better the next day. It was monotonous, but it worked. I think I was working with Lee for at least six months before we did anything that involved either of my wheels getting off the ground. My point is: my foundations were weak before I started working with a coach, and yours probably are, too. 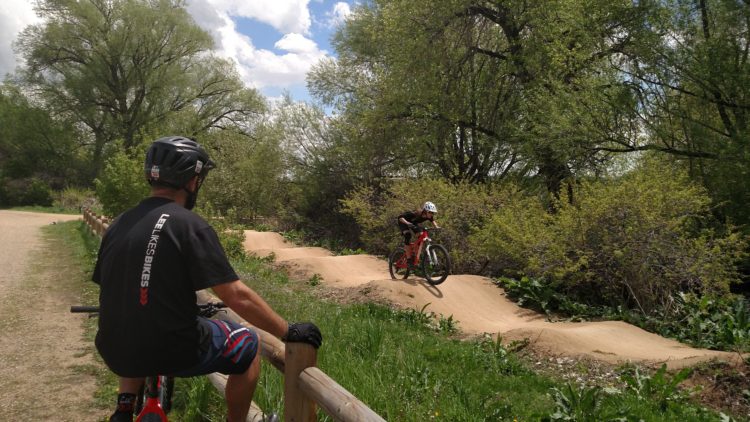 Lee watching me in the pump track and probably telling me to get even lower.