But my ass hurt. Do you know how long it’s been since my ass hurt from riding a bicycle? Years. It’s been YEARS. Because when you ride a bike all the time, your ass doesn’t hurt. You get ass callouses or something, and now, for probably the first time in six years, my ass callouses were gone and it hurt. This shouldn’t be happening, my brain raged, f*ck the process and all that mumbo jumbo, you are just really out of shape and you need to do something about it STAT.

But, it’s not. Or so I’ve been telling myself.

I have only ridden my bike three times in the past two months. One of those times was an hour long spin on a flat bike path. The other two times were this past week in Pisgah. Nothing like straight off the couch to riding with a bunch of pro and former pro dudes to make you question your training strategy. 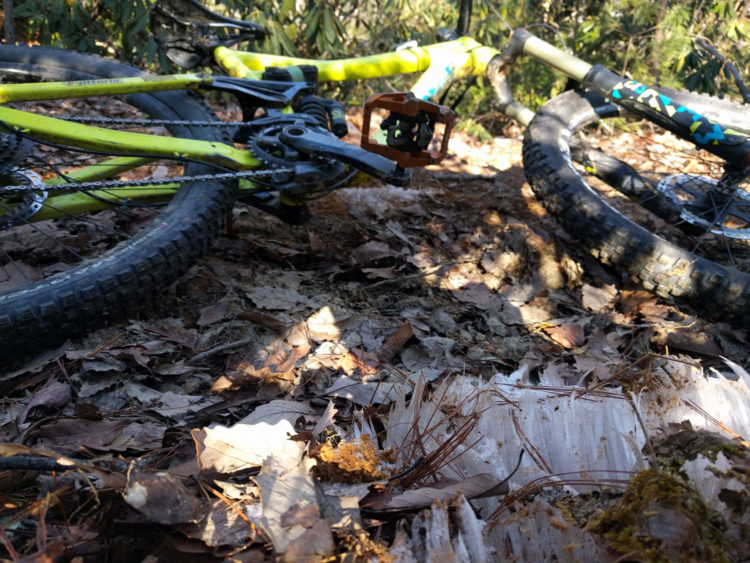 Here is a photo of some cool ice crystals from one of my two real rides.

It was easy to say I needed time off in October. Here’s a blog post I wrote about taking a month off the bike. I knew I needed that time, and the rewards were quickly evident. I felt re-energized and ready to tackle the off-season and train like I had never trained before. But I was wrong. I wasn’t ready. By late November I already felt stale and I was having knee issues again. I blamed the staleness on the weather and the knee issues on a new pair of shoes, but it was more than that. My plans for the coming year weren’t exciting me. The idea of racing — or training to race — was giving me a feeling in the pit of my stomach akin to trying to digest a soccer ball. While I had some great rides, I was having a hard time motivating myself to get out the door. I just wasn’t really having fun.

To be honest, I had a slump like this last year in December, but I pushed through it. This year I didn’t. I just stopped riding. And then I went to Thailand for three weeks. When I came back it was -5 degrees in Ohio so I didn’t start riding then either. So, now it’s the end of January, and I still haven’t started riding, except those two rides in Pisgah (we are now in Boulder, where it’s still snowy and cold).

It’s harder to justify needing time off in January. This has been prime training season for me in the past, although admittedly that hasn’t worked out too well. But being unfit and feeling sketchy on the bike in January is stressful. What if it doesn’t come back? What if I screwed up and took TOO MUCH time off? What if this wasn’t part of the process at all, but just me being lazy?

But, to be honest, I know that’s not the case. I know can trust this process.

Over the past few weeks, I’ve taken some steps to get myself headed in the right direction. I took a long hard look at my goals and realized that my racing goals weren’t really squared with my priorities — they just didn’t feel authentic and they didn’t excite me. I realized that even if I were able to win such and such race, it wouldn’t be that satisfying if I was still limping around dealing with knee issues and not able to run, or even walk, around the block. The truth is that my motivation for riding and racing has always been more intrinsic than I’ve been willing to admit. While it would be nice to get better results than I have, winning has never been my primary motivation (obviously or I probably wouldn’t have made it this far). I think for some people the idea of winning a race is motivation enough to train through the winter — it’s what gets them out of bed in the morning and out on the bike when it’s -5. But, honestly, I don’t care nearly enough about winning a bike race in a discipline that 99% of the world doesn’t even know about it. I just don’t. 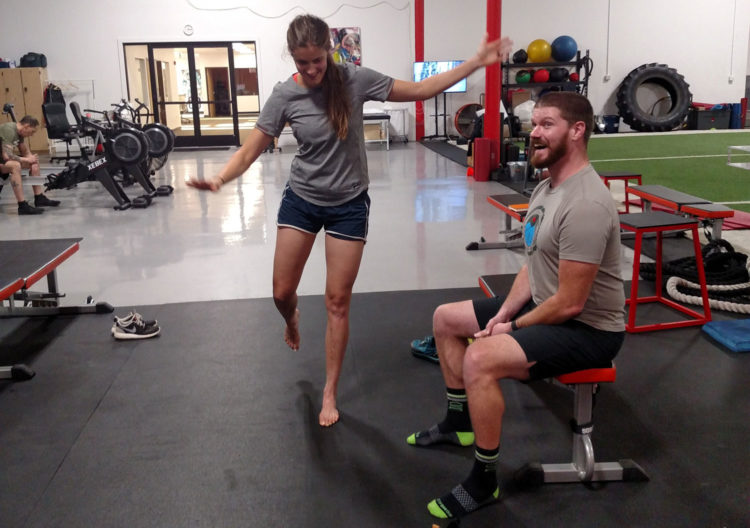 The good news is that I care enough about being better that I don’t need winning as a motivation — in fact, if anything, it just stresses me out and makes me feel stagnated and confused. But I care enough about improving and being a better athlete to do just about anything. Even not ride my bike for two months.

This is why I’ve set some goals outside of riding bikes – like this one that challenges and scares me more than any race related goal I’ve ever committed to — and changed up my schedule to focus on races that will be challenging or fun (or both).

And when the time is right, I will start training seriously again. Until then, even though my ass is sore, I’m trusting the process.